If you're one of the millions of people who have made the switch to high-def, you may wonder if your favorite pet has also noticed the difference.

There's a long-standing notion that dogs are unable to view television because of the way their eyes perceive electronically displayed images. There is truth to this idea, especially when it comes to the older, standard-definition televisions that featured convex screens. Those TVs, also known as cathode-ray tube (CRT) televisions, had a maximum refresh rate of 60hz (or 50hz in Europe), which meant the TV could display only 60 (or 50) images per second.

While this rate appears perfectly fluid and acceptable to the human eye, which processes only 50 to 60 images per second, it looks quite different to a dog. Since dogs can see about 75 images per second, they can also see the empty frames that show up between each image displayed on a 60hz TV.

This probably made a CRT TV seem more like an annoying, flashing strobe light to your dog than anything resembling a source of entertainment.

But, luckily for Rover, technology has changed, and there have been serious advances in home electronics over the last decade or so.

Modern HDTVs typically have refresh rates of 100hz and up, so dogs are now much more likely to see what we are seeing when they look at newer televisions.

But, before you rush out to buy a copy of Space Dogs 3D and an extra set of glasses, it's important to understand that, high-def or not, dogs still view television (and the world) in a way that's fundamentally different from our own.

Take color perception, for example. The old idea that dogs only see in black and white has actually been proved false in recent years. Dogs possess the same cone cells in their eyes that allow other animals to see multiple colors.

However, unlike humans—whose eyes use three types of cone cells—dogs are born with only two types of cone cells. This lack of an extra eye cell puts considerable limitations on a dog's ability to perceive certain colors, especially red and green.

A dog may look at a rainbow and only see different shades of yellow and blue, while we'll notice a total of seven colors in a variety of hues. Dogs don't perceive red as red, for instance. They probably see it as something closer to a brownish gray.

So, when dogs watch TV designed for humans, they're really only getting the Y and B of ROYGBIV. But one has to wonder if that's even an issue, since they view the rest of the world in exactly the same way without any trouble. 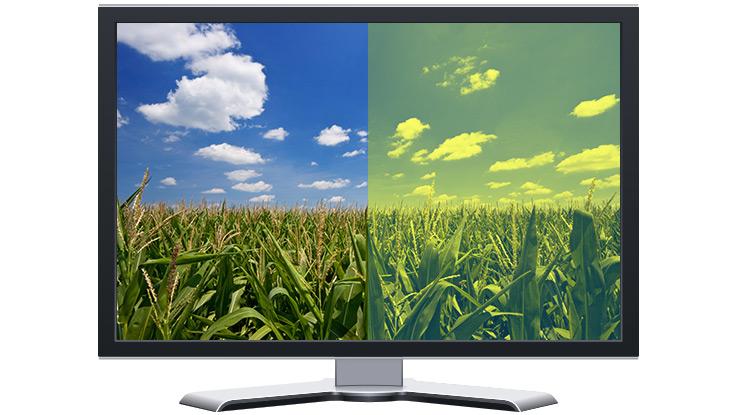 Regardless, if limited color perception creates a problem for channel surfing dogs, DogTV wants to be part of the solution.

The cable channel is designed to broadcast content specifically made for dogs. That's right, it's not just a channel about dogs. It's a channel for dogs (or, to be more specific, urban dog owners who feel guilty about going to work and leaving their pets behind).

According to the makers of DogTV, the content is meant to elicit responses of play and relaxation at peak times throughout the day, keeping your dog happy, stimulated, and out of mischief.

The channel's programming is even broadcasted through a yellow and blue filter, making it appear (at least, in theory) more visually appealing to dogs. "America's Veterinarian" Marty Becker, who has been featured on television shows such as Good Morning America and Dr. Oz, voiced his support for the channel, saying "It's got research behind it and production behind it[.] We know that the sounds that are there, the sights that are there, the visuals that are there, all of this is optimal for these dogs."

Of course, with obesity rates on the rise in the US, the question of whether we really want to risk turning our prized pups into boob-tube layabouts is enough to make any responsible pet owner wary.

However, the fact that most dogs spend the vast majority of their alone time sleeping (with or without television) should ease those concerns.

So, if Rover is likely to be spending 12 to 20 hours of his day lounging around anyway, it could be worthwhile to try leaving him with something designed to stimulate his mind.

If you have an HDTV and a dog who suffers from separation anxiety while you're away, DogTV may be worth a shot. There's always the possibility that you'll come home to a happier and more enlightened canine. Of course, you'll also have to be ready to battle it out for the remote.

Does your dog watch TV? Do you think dog-centric TV shows are a good idea? Tell us in the comments.