If you’re a fan of CKC mushing and follow any mushers on social media, there’s a good chance that you’ve heard of BADAS Musher, a.k.a. April Cox. 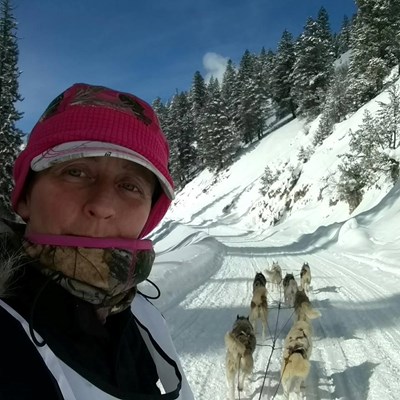 Cox is a musher who’s been enjoying the sport since the early 1990s. She entered her first official race in 2005 and never looked back. She’s shown considerable skill, competing in a number of races and winning the top spot in the 2013 Chester Winterfest Sled Dog Races, while also earning second place in the 2013 Chemult, OR, Sled Dog Races and the 2013 Siskiyou Sled Dog Races.

Oh, and the name? According to the BADAS Musher herself, it actually goes back to a joke from her college days. “I was actually in college in my thirties taking business administration, and I found a sticker that said ‘I have a BA in BS,’ and I kind of played on that,” she says. “So, it actually stands for Business Administration Degree Associate of Science.”

Of course, mushing doesn’t come easy for anyone, and it’s taken a lot of patience, persistence, and hard work for Cox reach the level that she has. If a race is coming up, you better believe April Cox will be outside with her dogs, training for the next challenge.

“I go out, grab my harnesses, and throw them on the quad, [and then] pull out into the dog yard,” Cox says, describing a typical training day. “I pull a quad into the dog yard, string out my gang line, then pull up at a drop chain stretched across the yard—like a staging area. I get each dog that I’m going to run, put them on the drop chain in order of how I’m going to hook them up. Then, go through down the line, harness each dog.

“[I] put any booties on if they need the booties, then hook them up to the gang line, open the gate, go get on the quad, and off I go! I make it sound so calm, but it’s pretty nuts. Not that calm at all. Sometimes it can be a little chaotic.”

Over the years, Cox learned how to handle the high-energy chaos of a team of dogs excited about doing what they do best, and she acquired that knowledge through first-hand experience.  Cox has a better understanding of her dogs now, and they have come to know her better as well.

When she entered her first race at Shaver Lake, California, in 2005, both Cox and her dogs were excited, but also unsure of what to expect. She was new to training, so her dogs weren’t as prepared as they could have been for the two-and-a-half-mile race. Nevertheless, Cox and her three-dog team showed up ready to go. 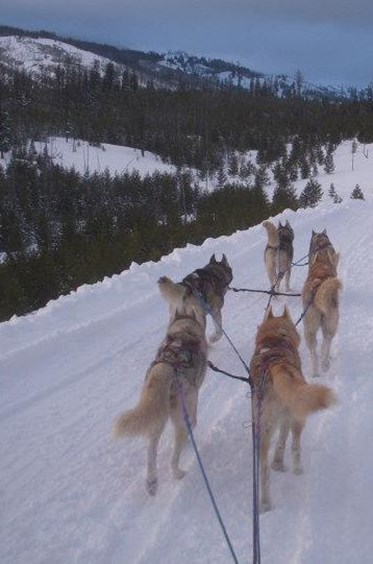 She remembers the dogs showing an odd calmness for their first time in the chute. They didn’t stir much while waiting for the race to begin. In fact, Cox was worried the dogs looked so calm in the chute that they might not run when the time came.

“It was in Shaver Lake, California, and we’re waiting in line, and I have helpers leading the dogs up to the chute,” Cox recalls. “And, these helpers had been helping all these other teams who had raced before, so they’re all banging their harnesses ready to go, and mine are standing all calm. And, someone made a comment about how calm my dogs were. And I said, ‘Oh, yes. They’re fine.’ And he said, ‘Well, wait until they get into the chute.’ And I said, ‘Well, they don’t know what a chute is, they’ve never raced before either.’

“So, we get in the chute, and they’re doing their countdown, because most races start in two-minute intervals. And I remember standing there, and people are lined on both sides of the chute, and I’m wondering, ‘God, I hope they’re gonna run,’ you know, because they don’t seem very excited, and you know it’d be kind of embarrassing if they say ‘Go!’ and we don’t.

“Well, [I had] a family—a mom, her son, and her daughter that I had racing—and they were all mostly [piebald] white huskies. And I had Trixie in the lead, and I had Aladar and Suri in the back. And, I had just done weight pulling with Aladar at dog shows before that. And I said, ‘Aladar, are you ready?’ And he kind of wagged his tail. And I’m like, ‘Trixie, are you ready?’ And then I said, ‘Well, I think they’ll go . . .’ because they watched the other dogs go.

“And they did.  They took off pretty fast, so it was kind of exciting. But, needless to say, I came in dead last, because coming up the hill without the proper training and conditioning . . . it was just a lot. And it was pretty warm. It was like 45 [degrees], which is pretty warm for husky standards. And I was way over-dressed. I was dressed in my snowmobile suit that I had had from when I lived in Idaho, which is actually way too warm for California weather.”

So, even though Cox didn’t finish in one of the top spots for her first race, she learned a lot about what it would take to go further, faster. But, while that race was certainly difficult, one of the most challenging tests for Cox and her team would come from the 2016 Eagle Cap Extreme Dogsledding Race in Oregon, which runs through the Wallowa Mountains.

The weather proved to be one of the biggest obstacles in the Eagle Cap race. Cox and her team nearly lost their way when heavy snow drifts covered a section of the path. After it disappeared under the snow, Cox unintentionally veered off of the track for an unexpected three-foot drop. She later glimpsed a red sign through the heavy snowfall, which informed Cox that at some point the storm had turned her team around and led them off course. 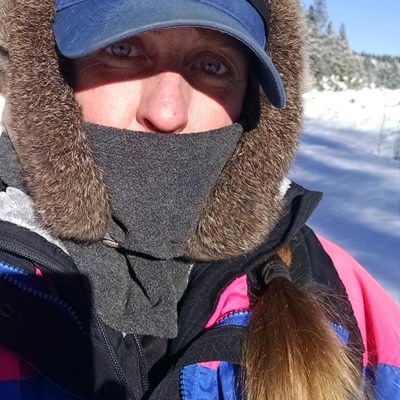 Following a short rest for herself and her dogs, Cox miraculously managed to get her team back on track, despite the inclement weather. After she passed the affected area, officials caught up with Cox to tell her that the weather had become so harsh in that section of the race that it could be skipped altogether, but since she had already made her way through, she could continue on with the race. With the worst already behind them, the team pushed on and finished the race, showing off the skill and determination that led the Continental Kennel Club to become a sponsor of Cox and her team of hard-working dogs.

If you’ve read about April Cox’s experiences as a musher and think you may have what it takes to get into the sport with your own team, the BADAS Musher offers some sage advice for newcomers:

“The best thing to do is to find a mentor, and there are mushers all over the country that do it recreationally or [for serious racing]. If you really want to do it, it’s a lot of hard work.

“But, yeah. Find a mentor, hang out with them, and go on training runs. Everybody always appreciates help and an extra hand, and we love addicting people to the sport.”

So, you’ve been warned. Once you get into mushing, there’s a good chance you may be hooked for life. But, after hearing April Cox’s exciting stories about the challenges she’s faced and the bonding she’s experienced with her team of dogs out on the trail, a mushing addiction doesn’t sound like such a bad thing after all.