Home > Blog > 2021 > September > Miniature Pinscher vs. Manchester Terrier: Can You Tell Them Apart? In the last blog, we discussed the similarities and differences between the Whippet and the Italian Greyhound. This time, we are going to look at two somewhat smaller breeds. What are some things you can look for when trying to spot a Miniature Pinscher and a Manchester Terrier? Let’s find out!

Miniature Pinschers are the smaller version of their cousin, the German Pinscher. The breed originated from Germany and became popular in the 1890s. They were used for hunting rats that infested establishments and towns. Modern medicine wasn’t available at the time to ward off diseases that the rats carried, so these dogs helped to keep the rat population under control. They got the name “pinscher” from the dominant way they used their mouths to “pinch” when hunting.

Manchester Terriers originated from Manchester, England. They are believed to have originated from Black and Tan Terriers. John Hulme bred the Black and Tan Terriers into what we know today as the Manchester Terrier. In the 1800s, these dogs were also used for hunting pests, such as rats. And what started as a necessity using these dogs eventually became simply a sport known as ratting. 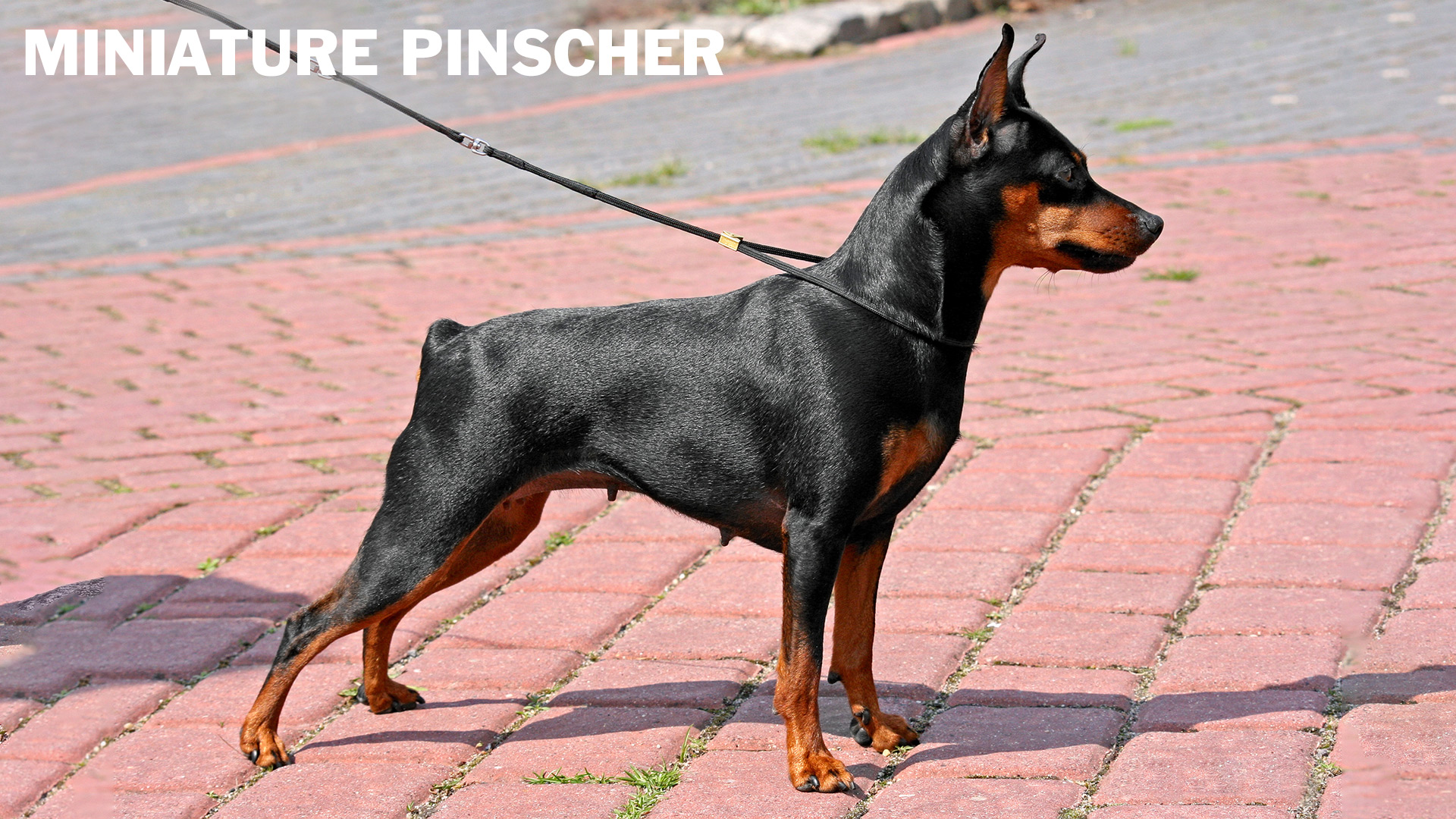 These two breeds are similar in looks with a medium-sized skull type and a wedge-shaped body. They never have bulging eyes. They have strong, well-developed muzzles, well-opened noses, the neck is clean-cut without excessive skin, the width of the forequarters is approximately equal to the width of the hindquarters, and the feet are oval to round and compact.

These breeds exhibit similar characteristics in their temperaments. They both can be seen as lively and intelligent, but the Miniature Pinscher may need more obedience training to keep their natural habits in check and are a bit more people-oriented than the Manchester Terrier. Neither should show any unprovoked aggression or fearful behavior towards people.

While these both qualify as smaller dog breeds, upon a closer look, there is a slight difference in pounds and inches between the two. The larger of the breeds is the Manchester Terrier. They weigh in at 12 to 22 pounds for males and females. The height of the males is 14 to 17 inches, while the females are 12 to 15 inches. Now, the Miniature Pinscher is just below the Manchester Terrier by only a few pounds and inches. They are about 9 to 13 pounds and 10 to 13 inches in height for both males and females.

One other difference for these breeds of dogs is in their movement. This isn’t hard to spot once you know what to look for. A Miniature Pinscher has a hackney-like gait caused by an imbalance between the forequarter and hindquarter angulations, with the forequarters being less angulated than the hindquarters. While this can look funny, it is also the cause of health problems for this breed. The Manchester Terrier does not have this hackney-like gait and, therefore, has a good balance to match its energetic and effortless movements. 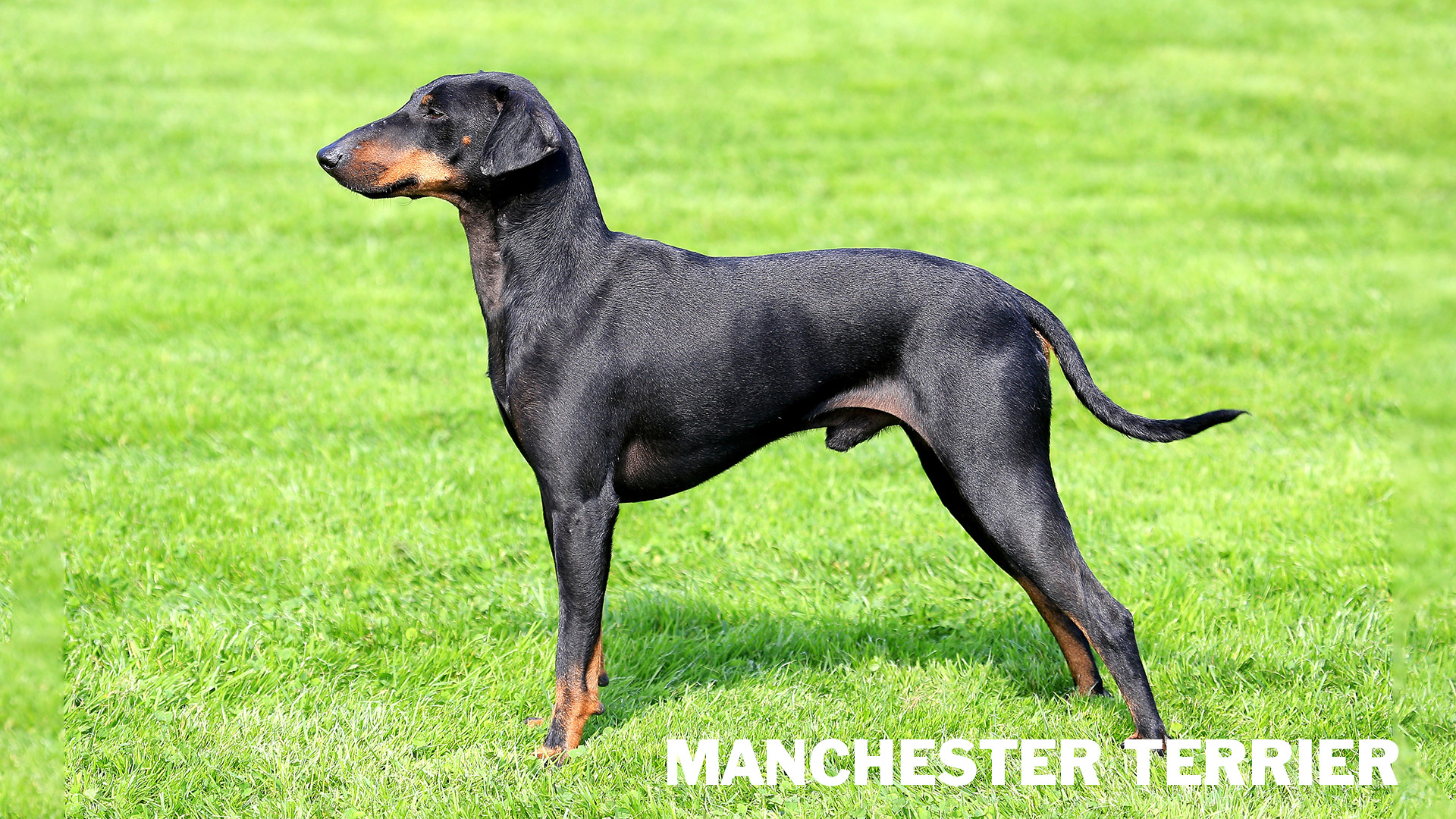 Bred for speed and movement, these dogs can be considered pretty equally matched in looks, temperament, and overall history, but one major difference is that the Manchester Terrier is bigger than the Miniature Pinscher, and they qualify under two very different breed categories. The Manchester Terrier is classified in the Terrier Breeds group and the Miniature Pinscher is classified under the Pinschers and Schnauzers group. So, if you think you know these amazing breeds of dogs, make sure you take a second look to be sure!