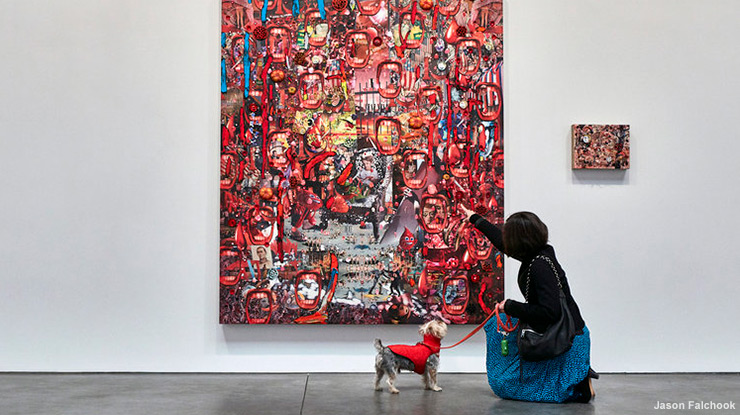 Ever walk into your kitchen only to find a week’s worth of used coffee filters, discarded dinners, and disposable plates littered across the floor? Well, your first instinct (after the explosion of expletives) might involve tracking down the trash-stained culprit to voice your displeasure, but don’t do it: there’s a chance your dog is just expressing his artistic spirit, and garbage is merely the medium through which he works.

If you think you might have a real Pawblo Pupcasso on your hands (editor’s note: pun courtesy of Krist Norsworthy), there’s an art exhibit that should pique his artistic interests. dOGUMENTA, an upcoming art showing designed specifically for canine viewers by humans, will run August 11–13 at Brookfield Place in New York City. The name is a play on dOCUMENTA, a world-renowned art exhibition that takes place every five years in Kassel, Germany. (Why is it impossible for people to talk about dogs without using puns?) 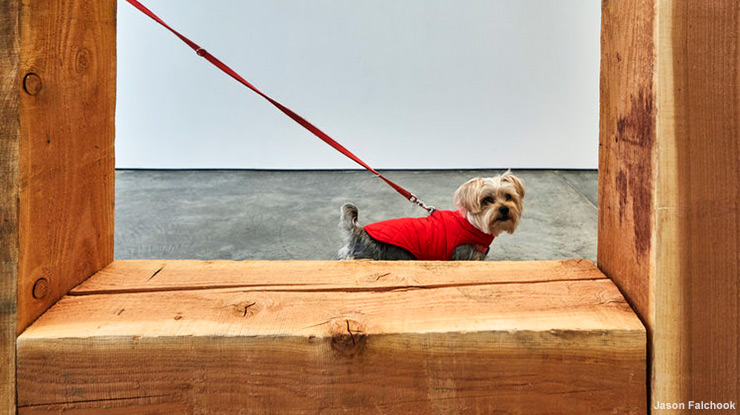 Created by New-York-based art critic Jessica Dawson—with the help of her Maltese-Yorkie, Rocky—dOGUMENTA is an art exhibition that aims to engage canine spectators in a way that no other exhibition has yet attempted. “It was clear that Rocky saw art differently than humans, ignoring New York Times reviews and artist resumes and engaging directly with the work,” reads a press release for the upcoming show. “Dawson realized that Rocky had something to teach human art lovers, and that he and his friends deserved an exhibition of art all their own.”

Jessica believes that people can learn a lot from dogs when it comes viewing art, especially in terms of how they choose to interact with it. In a video series posted to YouTube, Jessica describes the many unique ways Rocky approaches some of the artistic offerings he comes across both in galleries and outdoors. For example, while it’s not uncommon for people to gloss over artworks they’ve already seen once, twice, or a dozen times, dogs don’t seem to develop that same familiarity, always staying curious and cognizant of their surroundings. Jessica cites a work by German artist and sculptor Joseph Beuys located on 22nd Street in Manhattan as an example. 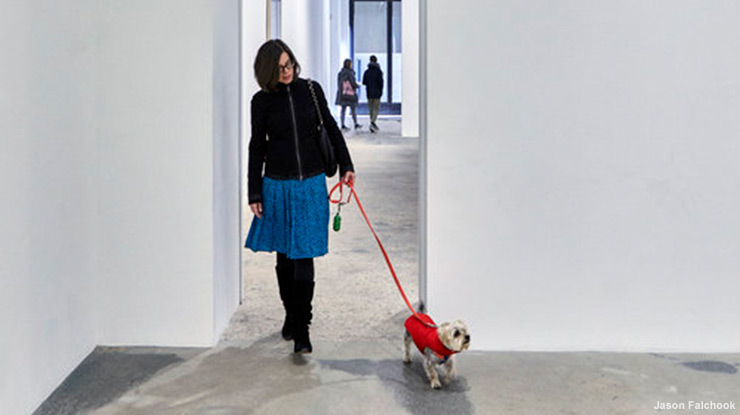 She says that while most New Yorkers tend to develop a familiarity toward Beuy’s sculpture and may even begin to ignore it after walking by so many times, Rocky is always straining at his leash to run up and inspect the work whenever he comes across it. In fact, Jessica says that Rocky has even given the sculpture his highest compliment by peeing on it, since as a dog he can’t exactly run out and buy the work, so that’s his way of saying he wants to claim it for himself.

According to the dOGUMENTA website, there are currently about 80 million dogs in the United States that are “hungry for culture.” While there’s no way of knowing just how much culture a dog can really absorb, let alone whether it’s actually something dogs have a “hunger” for, it can’t hurt to try, right? Let’s just hope the attending canines don’t feel compelled to “claim” every piece they see.

Lagotto Romagnolos are an Italian breed of dog that are bred exclusively for hunting the sought after truffles. The program at Barot University of Truffle Hunting Dogs in Italy can take up to four years to complete for dogs and their handlers.