When Matthew Johnson’s 20-year-old dingo-shepherd mix, Woofie, died last year, the Ontario man wasn’t quite ready to say goodbye. Fast-forward to today, and the Canadian film editor/director is busy with not one, but two new Woofie puppies thanks to modern cloning technology.

According to Matthew, he originally found Woofie caught up in a trash with two other puppies while he was climbing a mountain in New Zealand. She was only a few weeks old, abandoned, and in desperate need of care. The tiny pup must have had a pretty firm grasp on Matthew’s heartstrings even at that early age, because he ended up returning to Canada with a new canine sidekick in tow. It would turn out to be one of the best decisions of his life. 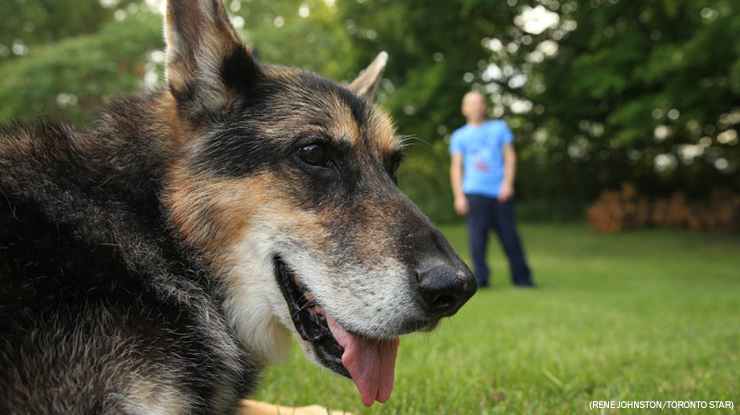 In addition to being a loyal pet, over the years Woofie worked as a search and rescue dog, and she even had a role in one of Matthew’s films, Doggy Daycare. However, perhaps one of Woofie’s most impactful acts was bringing Matthew back from the brink after he became deathly ill with bacterial meningitis. “I was dying and in palliative care for months,” Matthew said, speaking to the Toronto Star. “I had to learn to walk, talk, and was all messed up. She was the only reason I didn’t kill myself or let go.”

The road to recovery was incredibly difficult, but Matthew found the strength to keep going thanks to Woofie. So, in a way, just as Matthew saved Woofie when he found her in that trash bag in New Zealand, Woofie later returned the favor staying by Matthew’s side as he battled his deadly and debilitating illness. There’s little doubt that the pair’s long, rich relationship heavily influenced Matthew’s decision to have his dog cloned when she reached her twilight years.

“I’m not going to get a rescue dog and hope it will be the same dog; I’m going to clone it,” Matthew said, explaining why he wasn’t interested in simply adopting another dog. “I’m connected to this dog. I’ve had her for 20 years.” For the record, Matthew isn’t against adoption, and he has taken in other rescued dogs, but in his mind nothing would be able to fill the void left by Woofie’s passing—well, perhaps nothing except for another Woofie.

Matthew had hoped that Woofie would be able to meet her clones after the process had been completed, but sadly, Woofie passed on before that could happen. Ultimately, the process, which ended up producing two Woofie pups (Woofie Junior and Blondie), cost Matthew $80,000, but he seems to be very happy with the results. "I put Woofie's toys out, I saved them all . . . [Woofie Junior] went for the exact ball that was Woofie's baby toy," he told CBC.

Thankfully, both dogs appear to be happy and in good health. The pups seem to share the same markings, behaviors, and even the same moles as Woofie, and Matthew feels like he has his beloved dog back once again.

You probably love your dog dearly, but would you spend tens of thousands of dollars for his or her genetic copy? Tell us in the comments.