Wise men say only fools rush a frightened dog into surgery, and Dr. Ross Henderson of the Fox Hollow Animal Hospital in Lakewood, Colorado, is certainly no fool.

In a video posted to the Fox Hollow Animal Hospital’s Facebook page last week, the good doctor can be seen pulling out his six-string acoustic guitar and playing Elvis Presley’s “I Can’t Help Falling in Love With You” for a golden retriever scheduled to be spayed.

“She was running around and jumping up on the kennel, whimpering,” Dr. Ross told The Dodo. “I had my guitar there, so I decided to sing to her. She calmed down and put her head on my lap. It’s a good testimony to how effective music can be.” 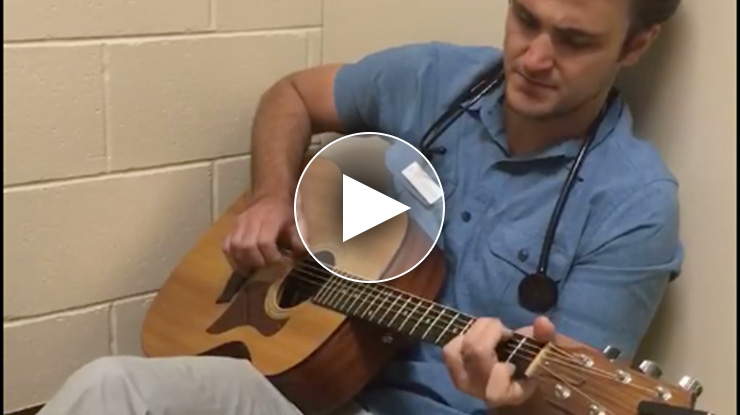 While the idea that human music (that is to say, music not specifically made for animals) could produce a calming effect in dogs may have seemed farfetched not that long ago, a growing amount of evidence seems to back up Dr. Ross’s claim. A 2012 study published in the Journal of Veterinary Behavior showed that classical music can increase the time a kenneled dog spends sleeping while also decreasing the time a kenneled dog spends barking and trembling.

Another study, published in Psychology & Behavior this year, found that soft rock and reggae also help dogs relax. However, in order to reap long-term benefits, scientists have realized that it is important to rotate the songs and genres, otherwise dogs tend to get tired of hearing the same old thing, and the positive effects will diminish or stop after about a week.

So, there’s plenty of evidence to support the idea that the right music can go a long way toward eliminating stress in dogs, and as Dr. Ross showed when he managed to calm Ruby down with a little Elvis before her procedure, the proof is in the pudding. In fact, while the guitar strumming might be exclusive to Dr. Ross, he’s not the only Fox Hollow staff member to serenade a nervous patient.

The official Fox Hollow Animal Hospital Facebook account posted the video of Dr. Ross with Ruby, saying, “Sometimes your patient just needs you to go the extra mile to make them feel comfortable when they're here for the day to have surgery. Dr. Ross has mastered the technique, and sweet Ruby was so thankful for that.” And, it looks like his technique paid off, because Ruby’s surgery went off without a hitch, and she began her recovery shortly afterward.

So, if you think your dog looks stressed out, it might be a good idea to break out your favorite instrument and give her a real, heartfelt performance—unless you don’t know how to play the guitar, of course. In that case, a nice soft rock or reggae CD should do.

President Theodore Roosevelt had 4 dogs during his presidency. One of his dogs, Pete, almost caused an international scandal when he ripped off the French Ambassador's pants during a White House visit. Pete has been rumored to be a number of different breeds, with the most likely being a Boston Bull Terrier.