Sadly, it seems increasingly common to hear about a young person being diagnosed with an incredibly serious illness or condition. Such was the case for 10-year-old Quinn Scharn when he grew worried over an odd pain in his knee. Quinn had already survived a bout with cancer at a very early age, which required the use of chemotherapy to treat the disease when he was just a baby. This likely gave Quinn’s mother additional cause to be concerned over the pain he had been experiencing. After hearing about the knee pain, she scheduled a doctor’s office visit to find out exactly what was was causing her 10-year-old son such discomfort. 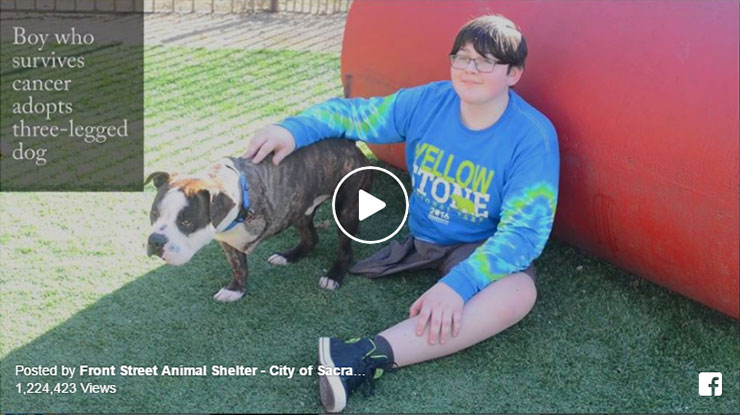 Unfortunately, the news from the doctor wasn’t good: the tests showed that Quinn had developed osteosarcoma, a particularly aggressive form of cancer that targets the bones. A test showed that Quinn’s right leg and hip had been affected, and other areas would likely also be affected if action was not taken soon. The health professionals treating Quinn came to the difficult conclusion that both his right leg and hip would have to be removed in order to prevent the disease from spreading further into his body.

Quinn was taken into surgery, and the medical team removed his right leg, along with the portion of his hip that had been compromised by cancer. The procedure was a success, and the surgeons were able to remove the dangerous tissue from his body. But surprisingly, when Quinn first woke up in his hospital bed, the main thing on his mind was a strong desire to own a dog—and not just any dog.

“When I was 10, my knees didn’t feel very good, [specifically] my right knee,” Quinn said, describing what happened in a video on the Front Street Animal Shelter’s Facebook page. “I went to the doctor, and they took a biopsy and found that I had cancer. After about a few months, they amputated my leg, and right after the surgery, I wanted a dog with three legs. That’s the first thing that I said when I woke up from the anesthesia.”

After living cancer-free for over a year following the procedure, Quinn finally got his wish. He recently visited Sacramento’s Front Street Animal Shelter to meet Logan, the three-legged pit bull he had been waiting for. The two really hit it off at their initial meeting, and Quinn’s mother ended up signing the papers to finally make it official and bring the dog into a loving forever home.

Now, Quinn’s long-held dream of adopting a three-legged dog has become a reality, and Logan’s need for a family has been met by a caring boy who waited nearly two years just for him. This boy and his dog have both faced incredible challenges throughout their lives, but now that they’re together, they won’t have to face those challenges alone anymore.