Given the terrible state Peanut was in only one year ago, it’s hard to believe things could turn around so quickly for the lovable pup. At the time, she had just entered the Delta Animal Shelter in Escanaba, Michigan, with some very serious injuries: her legs had been broken, her ribs had been broken, and she had a large amount of carpet sitting in her belly. 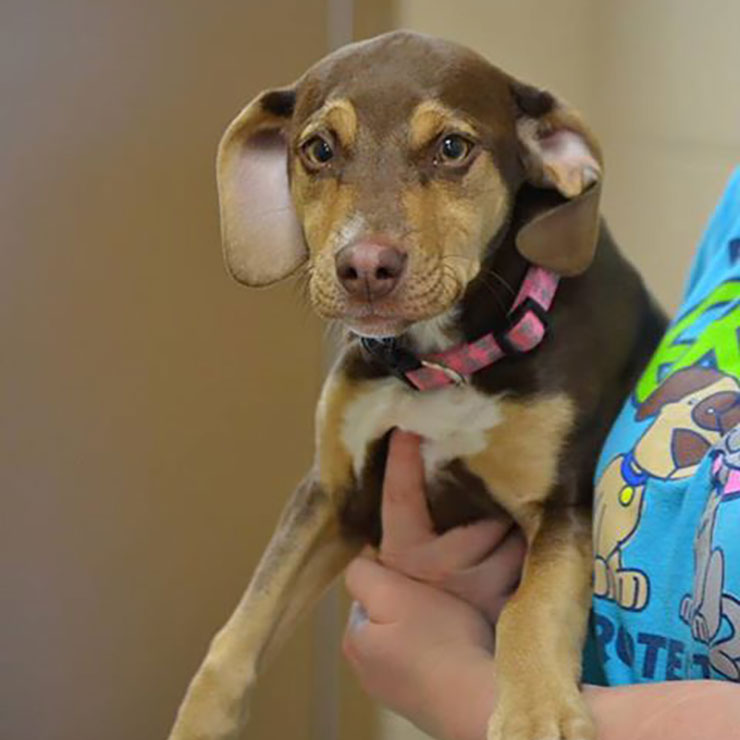 With Peanut facing such difficult circumstances at such a young age, it’s hard to imagine that she could ever recover to live a normal, healthy life—but that’s exactly what she did, with the help of a dedicated group of animal-loving professionals. After receiving treatment for her injuries, Peanut (whose name was Petunia at the time) made a miraculous recovery, and her former owner was eventually convicted of animal abuse.

Only a year later, Peanut was living with her newly adoptive parents and enjoying the wonderful, carefree life she had nearly missed. But her story was about to take yet another turn for the unusual, and the rescued dog would soon become a rescuer herself.

Recently, on one particularly frigid winter morning, Peanut wasn’t quite acting her normal self. According to her owners, she was full of energy, darting around the house back and forth, pleading to be taken outside—presumably for a walk. Eventually, she managed to get her adoptive dad, who was working in the garage at the time, to stop what he was doing and take her out.

As soon as she was brought outside, Peanut dashed straight towards a field located behind the house. The dog’s purposeful strides led her to a ditch, where she stayed until her owner caught up to discover the source of all the commotion.

Peanut’s adoptive mom described what happened next in a letter shared by Delta Animal Shelter on social media:

“My husband followed [Peanut,] and to his surprise, he found a naked, shivering, three-year-old girl curled up in a ball. He scooped [the girl] up, wrapped her in his sweatshirt, and brought her inside. He called 911 and reported the incident. By the time the ambulance and police arrived, the little girl could only say one thing—‘doggie.’”

The child was brought in for tests at a local hospital and found to be uninjured. She also had a sibling, who was rescued from the house the two children shared. Authorities said that, “Further investigation unveiled unsafe and unsanitary living conditions at the residence,” adding that child protective services were brought in, and “the found girl, along with another young female, were eventually removed from the residence.”

At the end of her letter to Delta Animal Shelter, Peanut’s mom reflected on the sheer joy that the once-down-on-her-luck dog has brought into her new home and the lives of those around her.

“Words cannot express how grateful we are that we have Peanut in our lives and how amazing she is. She is a part of our family now and thanks to wonderful people like you at the shelter, she is alive. Without her, not only would she have been gone from this world, but the life of this little girl might have been taken as well.”