It’s only fitting that Scotland, home of the St. Andrews green (recognized as the oldest golf course in the world), would also be the birthplace of a green puppy born to a golden retriever momma named Rio. Rio, who just gave birth to her a litter of healthy-looking pups early this month, shocked both owner Louise Sutherland and Sutherland’s daughter, Claire, when a grass-colored puppy emerged with the rest of his siblings. 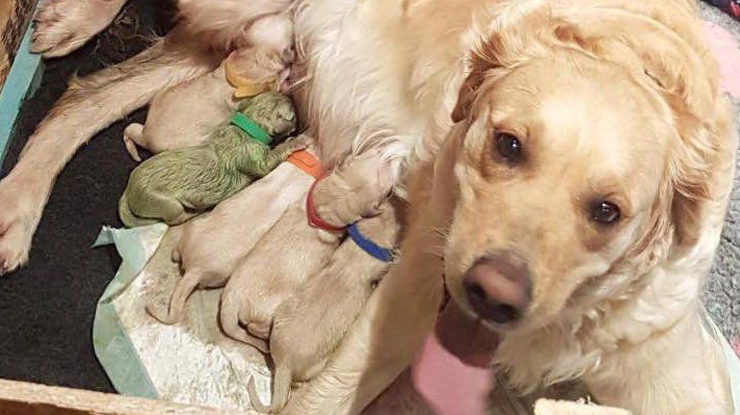 "It was all hands on deck but then as the puppies started to arrive, we noticed that one of the puppies had green fur. We couldn't believe it," Louise Sutherland said, recalling the experience. It wasn’t Rio’s first litter, since she had previously given birth to five puppies—two girls and three boys—over the span of five hours. However, this most recent birth (Rio’s second litter) was more complicated by comparison.

“The first pup was stuck, so myself and my daughter Claire managed to free him and pull him out safely,” Louise Sutherland said in an interview with The Sun U.K. “It was all hands on deck, but then as the puppies started to arrive, we noticed that one of the puppies had green fur. We couldn’t believe it.”

The jolly-green goldie was just the same as the rest of his siblings—happy and healthy. They only real difference was, of course, the color of his fur. Ultimately, Sutherland decided to name him Forest in honor of his unique coloring (personally, I would’ve gone for Hulk, but I think helping a mother dog give birth to a litter of seven more than entitles Sutherland to give the dog whatever name she wants).

While Forest’s coat color was indeed extremely unique, it was not one-of-a-kind. There have been at least three other known instances green pups being born into litters, and not all of those verdured pups were golden retrievers. In fact, one of the puppies was born to a chocolate Lab mother, later gaining the name Fifi as a nod to the half-ogre Princess Fiona from the Shrek movies. 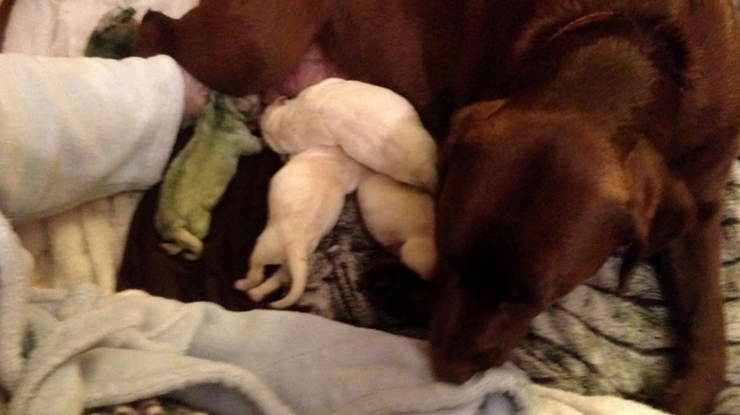 Of course, as magical as a green puppy may seem, the reality can be easily explained by science (well, not so easily if you’re the squeamish sort). The explanation lies in a green bile located in the placenta called biliverdin, which is what gave Forest’s coat its strange pigmentation.

Over time, the green color fades (as has already begun to happen with Forest), and the coat color returns to whatever color it was originally meant to be before the placenta-bile dye job (you were probably planning on skipping lunch anyway).

So, while the mystical nature of the green puppy is, in reality, not very mystical and actually kind of nasty, there’s no doubt that young Forest is officially a member of a very, very exclusive group of dogs.