When some dogs get excited, you can’t help getting in front of them to avoid their overly enthusiastic, whip-like tail wags. But when this dog gets excited, you might want to be in a different zip code.

Kidding aside, we bet you’ve never seen a dog with a tail as long as Keon’s—and he did just break the Guinness World Record for Longest tail on a dog, so it’s a pretty safe bet.

That’s right, according to the Guinness World Records website, this Irish wolfhound’s tail is an incredible 76.8 cm (30.2 inches) in length. That’s over two-and-a-half feet long! Obviously we wouldn’t recommend it, but you could practically play jump rope with that tail.

But, even though Keon’s tail is certainly exceptional, Guinness World Records judges weren’t going to just hand him the Longest tail on a dog title. Before it could become official, Keon had to have his tail measured a by trained veterinarian, beginning from the highest point on the top of the tail and ending at the tip of the tail. And, since the tail itself was measured and not the fur attached to it, the tail you see in pictures is actually slightly longer than what was measured.

Keon hails from Westerlo, Belgium, where he lives a happy life as a family dog. According to Keon’s owner, Jef Thys, “Keon is an Irish name, and it means ‘brave warrior.’ Keon is a great dog, but he’s no warrior.” 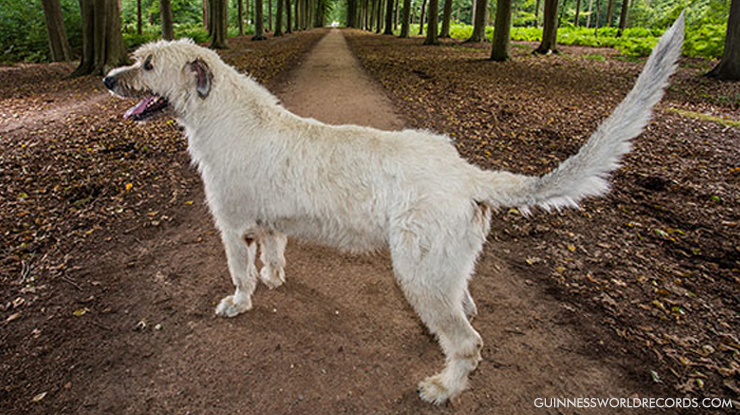 A video uploaded by Guinness World Records shows Keon posing with his framed certificate, and we get to watch the Irish wolfhound enjoying himself outdoors. When you see the sheer size of Keon as he gallops through leaf-covered trails in woodsy areas, it’s easy to understand how he broke the record (and why the previous record holder was also an Irish wolfhound)—if you squint your eyes he almost looks like a horse! But Keon’s family is more than happy to have the big galoot around, with owner Ilse Loodts describing him in the video as “a very nice dog who is easy to take care of” and “a gentle giant.”

Giant hounds similar in type to Keon have existed in Irish legends, lore, and literature since the beginning of Ireland's recorded history. They were the protectors of kings, defenders of life, and hunters of game until the fifteenth century. From that point, they were primarily used to hunt wolves. As the amount of wolves living in Ireland diminished in the late-eighteenth century, the need for wolfhounds dropped, as did the dogs’ numbers. The wolfhounds became all but extinct during the Great Irish Famine, only to be revived by Captain George Augustus Graham in the late 1800s. Thanks in part to Graham’s efforts, the Irish Wolfhound is still around today and recognized as one of the tallest dog breeds in the world. 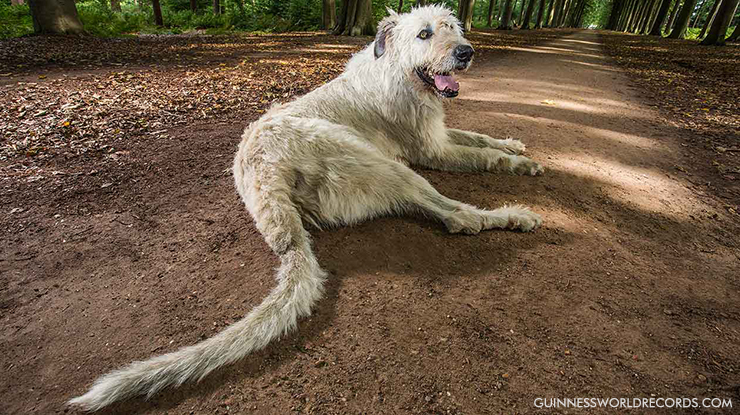 If you want to learn more about Keon and a number of other outstanding and record-breaking dogs, including the world’s tallest female canine, check out the Guinness World Records 2017 Edition.