Every morning, before most of the residents of Simmons Drive have even set foot outside of their homes, Paul Goldan and his loyal golden retriever, Quincy, are already out and about. But they aren’t outside just to take a casual stroll around the neighborhood (although, there’s no doubt both Goldan and Quincy must find the fresh air and exercise enjoyable).

They have walked up and down Simmons Drive for the past 11 years with a laudable goal—to do something nice for their neighbors. Through rain, sleet, and snow, Goldan and Quincy have gone out each morning and walked from one house to the next, with Quincy grabbing a neighbor’s newspaper in his mouth and dropping it off at the recipient’s doorstep before moving on toward the next house.

"He was only about the size of his head now when he started coming with me [on walks around the neighborhood]," Goldan said in an interview with the Daily Camera (which is, interestingly enough, the newspaper that Quincy delivers to neighbors’ doors each morning). "He couldn't do the Sunday papers because they were too big for him then, but he still came along."

In time, however, little Quincy learned how to fetch a ball, and eventually he became good enough at that to move on to newspapers. Goldan even made him a special harness with reflectors for extra safety while he’s out on the job.

“To some extent it's fun to train the animal and to see how fast they respond, but more important for me, it's just nice to give to your neighbors,” Goldan told NBC 9News in Colorado.

While the idea of a canine delivering newspapers to neighbors sounds pretty novel, Quincy wasn’t actually the first paperdog on the Simmons Drive route. Quincy’s predecessor, Riley, was also taught how to bring neighbors their newspapers by Goldan, which he did for over twelve years. Between the two of them, both Riley and Quincy have delivered papers on Simmons Drive for over a quarter of a century.

It shouldn’t come as any surprise to hear that Quincy has made his fair share of fans and friends around Simmons Drive over the years, bringing news to neighbors’ doors and smiles to their faces. In fact, neighbors who were initially unaware of the fact that their newspapers were being delivered-by-dog ended up leaving impressive tips for the bewildered (but undoubtedly grateful) newspaper delivery person. However, once Simmons Drive residents learned how the paper was actually making it to their doorsteps, they had nothing but praise for Goldan-dog delivery team. 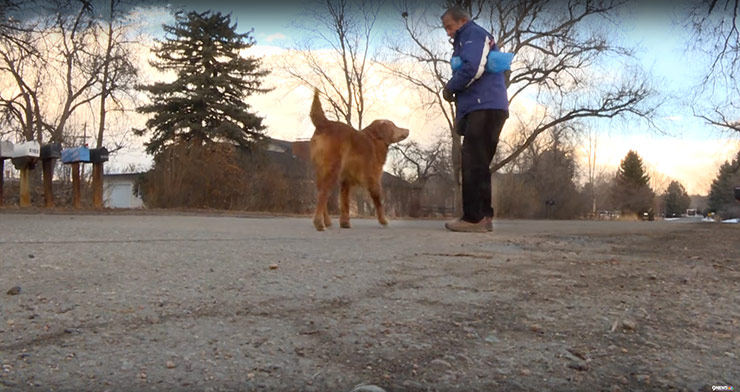 This is one of those rare stories where everyone comes out a winner. The neighbors get their papers, Goldan gets to spend some quality time exercising with his dog while both of them enjoy positive time outdoors, and Quincy performs a job he loves while getting paid in treats and adoration throughout the process. It’s pretty much the definition of a win-win-win scenario.