Home > Blog > 2017 > February > Forced to Say Goodbye to Her Dog, This Girl Wrote a Heartfelt Letter to His Future Family

There are few things kids cherish more than their pets, and when it comes to dogs, they basically become furry members of the family. However, a girl recently had to say goodbye to her canine sibling after her parents decided that the dog posed too much of a risk to the children in the family.

It’s not that the three-year-old dog, Rhino Lightning, had a bad attitude. No, unfortunately the problem was that he had grown quite large without understanding just how big of a dog he had become, and his well-intentioned attempts at play were too rough for the small children in the family. At some point, the family decided that in order to ensure the safety the little ones, Rhino Lightning would have to be put up for adoption.

When the family showed up to drop off Rhino Lightning at the shelter, they also left something else with the caretakers: a 15-page letter/instruction manual penned on a spiral notebook by the girl. Reading the heartfelt pleas in the notebook, it’s clear that Rhino Lightning meant the world to her. Here’s an excerpt from the letter aimed at Rhino’s future owner: “Hi, if you are reading this you must own Rhino now. He was my puppy, I really hope he is in a good environment. I really miss him [and] I wish he knew that he was a pretty puppy.”

The letter was also filled with a number of tips for the owner to be, such as suggestions to watch out for Rhino’s cheeks because they “make lots of slobber,” to take him on two to three runs per day, and not to tease him with treats, “or else he will start to bark like crazy.” The girl also urged Rhino’s new owner not to give him any tennis balls because “he rips those apart in one day, but if you give him a green Nerf ball he can’t.” She also expressed her concern about Rhino ending up with a different name: “His full name is Rhino Lightning, then your last name. Please don’t rename him.”

This girl’s care for her dog is crystal clear and visible on every page of the letter, and it’s easy for any dog owner to relate to her feelings of concern for the family dog. “It's the first time that a child has done this,” Deann Shephard, a representative of the Humane Society of Utah, told Salt Lake City’s Fox 13. “It was very heartbreaking to see from [the child’s] perspective, [her] relationship and friendship with this dog, but we hope that [she] sees the story and knows that [her] best friend is going to find a new home.” 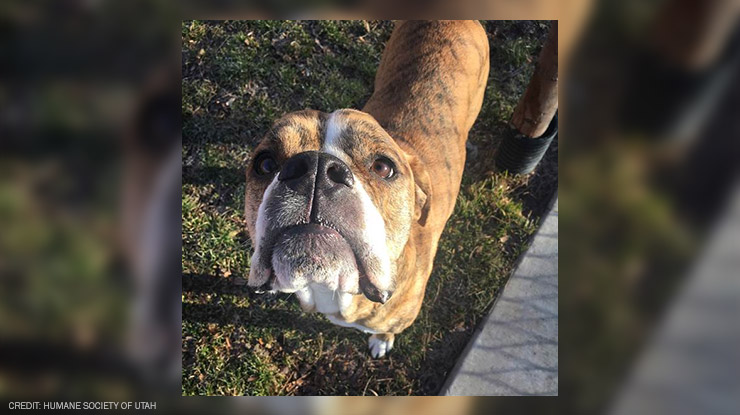 Luckily, it didn’t take very long for the child to see her best friend get a new home. After hearing about Rhino’s story and the letter, Utah local Melanie Hill was moved to adopt the beloved dog. She said that she was dropped off at an orphanage at six weeks of age, so she can sympathize with Rhino’s situation. Melanie also pledged to love him just like the young author of the note did.

But the best part? Rhino will be entering a loving forever home with a new canine brother named Bentley! Hopefully both siblings will get along great and provide Rhino with the happy ending his original family wanted for him.