When it rains, it pours. And for one Farmington, Utah, family, it seemed like the rain would never stop pouring over the course of 2016.

According to reports, the husband of the Coates family attempted to rob a bank. Following his arrest and imprisonment, the rest of the family struggled to stay afloat financially, culminating in a foreclosure on the family home.

However, the terrible news didn’t end there. At some point that same year, the family dog, a boxer named Zoey, began to experience fits of seizures. To make matters worse, a large mass began to grow on her body around the same time. The family believed the mass was cancerous and that its growth was causing Zoey a great deal of pain.

Left with few options and little hope, the Coates family seemed to think that Zoey’s best days were behind her, and her situation would only get worse as time went on. Eventually, the difficult decision was made to bring Zoey to the vet and have her euthanized.

The trip seemed too painful for Tawny Coates, Zoey’s owner, so she asked her father, Larry, to bring Zoey to the vet for the procedure. Afterward, Larry said he left the veterinarian’s office with a receipt for services of euthanasia and cremation that totaled $215. As far as the Coates family knew, that day was Zoey’s last on earth. 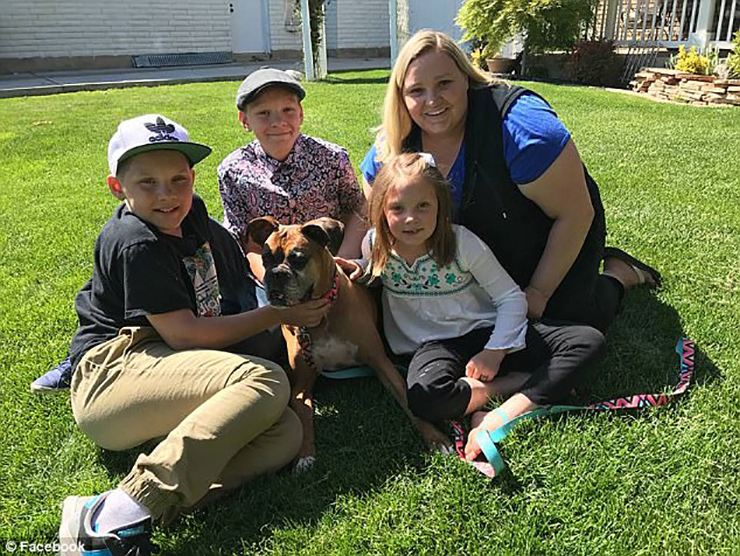 However, fast-forward six months later, and the story of Zoey, the Coates family, and the trip to the vet takes a strange and surprising turn.

After Zoey’s passing and everything else that had happened in 2016, Tawny thought that the addition of a new dog might help the family heal after experiencing so much loss in the previous year. But when she searched online for a new family dog, Tawny came across a very familiar face.

“I see the Boxer Town rescue page, and I'm like, ‘That looks like my dog.’ Then I thought, ‘I’m crazy,’ but I click on it anyway and zoom in and say, ‘No, that’s my dog!’” Coates said in an emotional conversation with Utah news network KSL.

Sure enough, the dog featured on the Boxer Town Rescue of Utah Facebook page was none other than Zoey. Soon, the Coates family found themselves faced with the simultaneous joy and confusion of learning that their beloved dog was still alive, despite the fact that they had been told otherwise.

Since Tawny’s father had left the veterinarian’s office with a receipt for Zoey’s euthanization and cremation, her sudden reappearance raised a lot of questions.

Dr. Mary Smart, the veterinarian who was supposed to perform the procedure, now says that she took the money that was supposed to go toward the euthanization and instead put it toward a surgery to remove the large mass that had developed on Zoey’s body.

“In my professional opinion, this was a dog that had years to live, and I didn’t want to put the dog down. I was trying to save its life,” Smart said, speaking to KSL. “Had I any inkling that they might at all be interested in having the dog back, I would have for sure called. But after my conversation with Mr. Coates, it just seemed very obvious to me that they didn’t want the dog.”

Mr. Coates, however, denies Dr. Smart’s recollection of their meeting. He has rejected Smart’s claim that he had no interest in treating Zoey’s condition, calling it a “complete falsehood.”

Zoey’s story did indeed take some odd turns, and her family has been on an emotional roller coaster following the decision to put her down, only to see her pop up on an online adoption page.

But, despite all of the confusion—including the receipt for Zoey’s euthanization and a sympathy card signed by the vet staff—the Coates family has been reunited with a loved one they thought was lost forever, and now Zoey is finally back where she belongs.