“Anyone know what kind of snake this is? Florida . . . Slayer and Paco Both at emergency vet after being bitten due to swelling!!”

That was the question Melissa Butt frantically asked her Facebook friends on the afternoon of August 13th. The question appeared above a picture of the remains of a freshly killed brown and tan colored snake sitting in a clear plastic bag.

Earlier, Butt’s two grandchildren had been outside playing when she heard her two pit bull dogs, Slayer and Paco, begin to bark fiercely and without stopping at something in the garden.

The dogs would not let up in their barking, which made Butt concerned enough to have her daughter pick up both of the children—a four-year-old named Zayden and a one-year-old named Mallory—to bring them indoors. 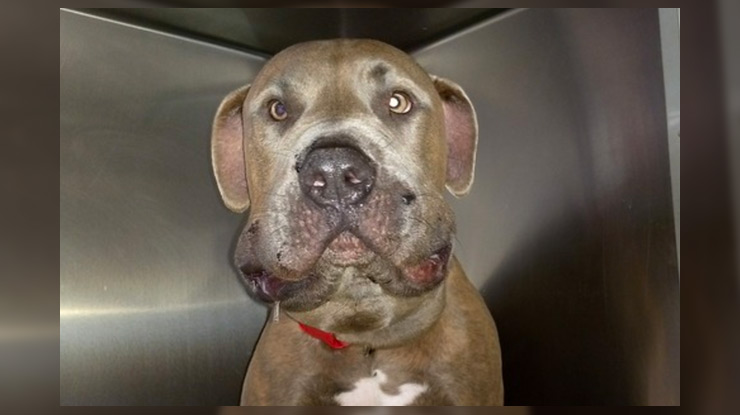 When Butt returned, she saw both dogs standing near the body of a dead snake, but they were not unscathed.

Nine-month-old Paco had received a bite on his elbow, which was cause enough for concern. But his brother, Slayer, had been struck two times in the face.

Ultimately, it was Slayer who killed the snake, nearly biting it in half according to Butt. “My Slayer takes over all of those situations,” Butt told CBS News. “He's ultra protective of the family.”

As Butt would later learn, the snake that had bitten both of her dogs and come so close to her young grandchildren was a copperhead. While a copperhead bite isn’t likely to be lethal for the average adult human, their venom can pose life-threatening risks to children and small animals.

Both dogs were rushed to the vet, where they were given antivenin to counteract the effects of the copperhead’s poisonous bites. But Slayer and Paco had sustained life-threatening injuries, and they weren’t out of the woods yet.

Paco, having received less-serious injuries than his brother, recovered first and was able to go home. But Slayer’s face had swollen significantly, and fluid began to fill up beneath his jaw. To make matters worse, the swelling stopped him from talking oral medications and eating.

“I can’t express how much our boys mean to us, and to have Slayer in so much pain just breaks my heart,” Butt said. “They’re great, gentle boys who put themselves in harm’s way to protect the grandchildren.”

Thankfully, after days of treatment, the swelling in Slayer’s face diminished, and he was able to finally go back home. Additionally, the good people at Frankie’s Friends, a non-profit foundation dedicated to saving pets, heard about Slayer and Paco’s story and were able to raise over $7,000 for the dogs’ vet bills.

While it’s terrible that Paco and Slayer had to go through such a painful ordeal, their selfless act may have very well saved the lives of little Zayden and Mallory. Chalk this up as one more example of dogs going above and beyond to protect the families they love.

The lives of some disabled and disadvantaged dogs have dramatically changed for the better thanks to breakthroughs in technology. One such canine is Derby—a dog born with deformed legs who gained the ability to walk and run thanks to 3D-printed prosthetics.