Early care can go a long way toward improving a puppy’s chances of living a long, happy life. A responsible breeder knows just how important the first few days and weeks can be for a puppy’s wellbeing, but even the time they spend in the womb can affect the dogs they will become. Here are a few tips breeders can use to start their puppies off the right way.

While it may seem hard to believe, the stresses (or lack thereof) experienced by a pregnant mother can have substantial effects on the physical, mental, and emotional state of the pups.

A dam’s stress hormones pass through the placenta, guiding the neurological development of the pups. Pups born to low-stress dams are wired to handle moderate amounts of healthy stress, but pups born to highly stressed dams are wired to be born into a high-stress, survival situation.

Furthermore, puppies born to stressed or sick dams exhibit more white spotting on chest, toes, and chin due to the disruption of the migration of melanocytes, and they are more likely to have reduced learning capabilities. They can also exhibit increased emotional reactivity and an increased likelihood for showing emotional extremes, which can include aggression, fear, or phobias.

As a breeder, you need to limit the amount of stress your pregnant dam experiences. This means that travel should ideally be limited to short distances, and if there are certain things that you know will trigger the dog’s anxiety, it’s probably a good idea to limit her exposure to sources of significant stress and anxiety. This is not to say that the pregnant dam should experience no stress whatsoever, since stress is a natural part of life, but if there are situations that you know will produce a high-stress/high-anxiety response in your dog, you should learn how to avoid or mitigate them. 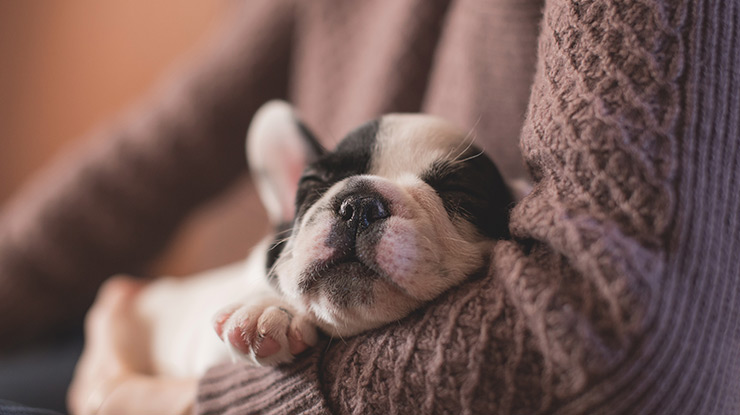 The importance of early puppy handling cannot be stressed enough, which is why many breeders of the top-performing dogs today use a system known as the Biosensor Routine. The Biosensor Routine is a series of five simple exercises performed on each puppy once a day, starting at three days of age. Each exercise lasts a minimum of three seconds to a maximum of five seconds per exercise, and the last exercise is completed on the 16th day.

The way that the Super Puppy Routine works is that it puts the neonatal puppies under a very small and controlled amount of stress. Because the stress is mild, the puppies are able to recover from it quickly and easily. This allows the puppies to learn to cope with and recover from small amounts of stress at an early age. This, in turn, helps them use these coping mechanisms later in life when dealing with higher levels and intensities of stress.

The ability to cope with stress as an adult has a positive effect on the body as a whole. Because the dog is able to cope and rebound, the body isn’t flooded with stress hormones (which hinder thought, cognition, reasoning, immune system functioning, maturity, growth, healing, recovery from illness and injury, and other life processes). The routine should only be performed once a day, no longer than five seconds per exercise. Too much stress on a neonate can have negative effects, so to help keep the level of stress manageable, use the minimal amount. Below is a list of the different exercises with a description of each.

Once you have finished the Super Puppy Routine, continue handling the puppies. The eyes and ears should be open, and they should be getting around better than they were at the beginning of the neonatal period (wobbly walk as opposed to the belly-dragging crawl). You can also begin to add things to the environment, such as a small television turned on with the volume on low, to get them used to noise in the background. Making noise from another room (gradually increasing the volume) will also help to reduce sound-sensitivity.

Tip #3 - The Importance of Soft Mouths

This is perhaps one of the most important lessons that breeders can teach their puppies. Many people try to stop puppies from biting and nipping altogether, but this is a mistake. The truth is that all dogs can and will bite if provoked, even those trained never to bite a person, no matter the size, breed, or sex (dogs that are afraid or in pain are the most common biters).

To be sure that you produce and home the best puppies possible, they must be taught bite inhibition (that is, to have a soft bite) rather than to stop biting altogether. Remember, if a dog is provoked into biting, it will bite—even if it’s been “taught” not to bite. And when it does, it will bite with the same strength and force that it last used as a puppy (usually a full-mouth, full-force, damage-causing bite).

While puppies can learn bite inhibition through normal interactions with their siblings and mother, a breeder can also encourage a puppy to learn bite inhibition. When playing with the puppy, the breeder can allow the puppy to mouth the hands, but the breeder must interject with an “Ow!” loud enough to get the puppy’s attention if pressure is applied to the mouthing, followed by about a half-minute to minute-long break from play.

This is essentially the way puppies learn how rough is too rough when playing with siblings or interacting with the mother. When puppies learn that biting too hard will end the attention and play they are receiving, they will eventually adjust their behavior to avoid losing access to what they want. These lessons can be especially important for puppies that don’t have siblings or mothers around to teach them naturally.

By teaching your puppies to have soft mouths, they will do far less damage (barely touching the skin, if at all) when mouthing. This is a very simple, yet extremely important, lesson for puppies. Learning how to use a soft mouth during interactions can save their lives, as well as the lives of others (such as children).

Part of the socialization process includes introducing puppies to human companionship, which can in turn make them better pets when they find their forever homes.

If you or someone you trust can spend at least a few minutes each day handling the puppies individually, it can help them become accustomed to human interaction. These early interactions can shape the type of dog each puppy will become. 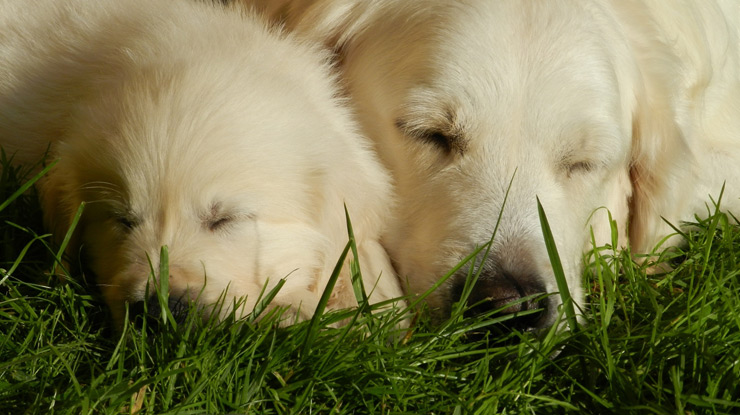 Your puppies should spend at least eight weeks with their littermates and mother if possible. Separating a puppy from its mother and the rest of the litter too early won’t just create problems for the puppy early on, but it can also alter its behaviors later on in life.

“The odds of displaying destructiveness, excessive barking, fearfulness on walks, reactivity to noises, toy possessiveness, food possessiveness and attention-seeking were significantly greater for the dogs that had been removed from the litter earlier during the socialization period,” the researchers found.

So please remember that it’s always best to give your litters the appropriate time to mature before sending them to their forever homes. It’s one of the many ways you can give your puppies the advantages they need to be the best family dogs that they can be.

Note: Some of this story’s content originally appeared in an article titled 3 Tips for Better Puppies.