Home > Blog > 2017 > April > What a Pickle: Dog Rescued After Getting Head Stuck in What Appeared to Be a Large Pickle Jar for Three Days Sometimes it pays to go with your gut instincts. But, in the case of a Fort Worth, TX, terrier mix who decided to throw caution to the wind when going after some tasty morsels at the bottom of a large food jar, the choice was pretty costly. Sure, he may have lapped up whatever food had been left at the bottom of the container, but once he was done, he ran into a slight problem—it seemed that the jar wasn’t quite done with him.

This poor pup was eventually spotted by local residents roaming around the neighborhood with a jar stuck on his head, and as funny as the image is, the situation was actually very dangerous, since he was unable to see clearly, breathe normally, and eat or drink as long as it stayed there. Luckily, some Good Samaritans called the authorities, and animal control soon showed up at the scene. 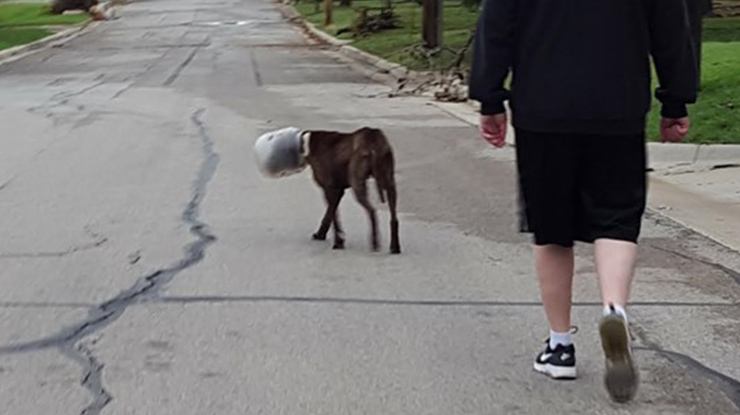 When the animal control officers arrived, the dog was lying down in a state of exhaustion. One of the officers secured him while the other did his best to remove the jar from the dog’s head. At last the jar came loose, and he was able to take in a few gasps of some much-needed fresh air.

When he was first spotted with the jar on her head, those nearby thought the terrier mix had a pickle jar on his head, and since no one knew who he belonged to—if anyone at all—they gave him the name “Pickle.” However, it wasn’t a pickle jar that he had been trapped in.

“It [was] actually one of those cheese ball containers,” Animal Control Officer Randall Mize told CBS 11.

But the name stuck, and now that Pickle has been rescued he is receiving treatment to get his health back up to par after being trapped without food and water for so long. Once he makes his recovery, Pickle will be put up for adoption at the City of Fort Worth Adoption Center.

After this harrowing ordeal, we certainly hope Pickle can find a warm home where he’ll have lots of love and plenty of snacks to spare. Just one rule, though—no jars, please.