Take one look into your dog’s eyes during any given game of fetch or cuddle session on the couch, and it should be pretty easy to see the love and adoration he has for you. But if you no longer looked like yourself, would he still have the same reaction?

That’s exactly the situation Shane Godfrey of North Carolina and his loyal dog, Willie, found themselves in after being separated for over a month while Shane struggled with a myriad of serious health problems. 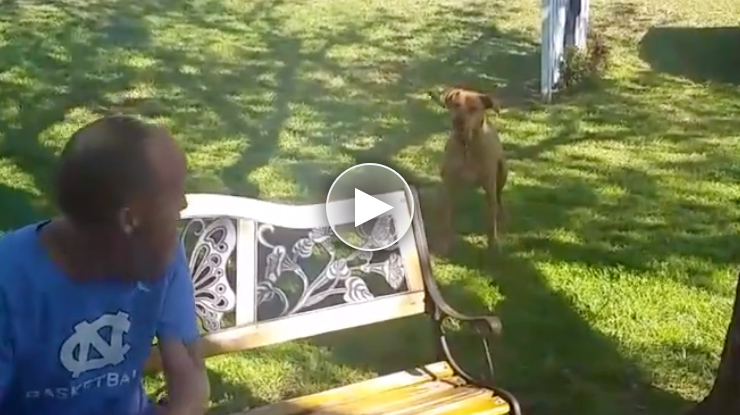 The North Carolina man’s life was turned upside down when a bout with the flu turned into double pneumonia and a host of other dangerous conditions, including kidney failure and encephalitis, last March. In fact, his condition worsened so severely during his illness that neither Shane nor his doctors were certain that he would be able to pull through and make a full recovery.

Miraculously, as bad as things got, Shane’s situation did begin to improve over time, and his body fought back against the illness and allowed him to return from the brink. Unfortunately, the disease still took its toll, and Shane lost a total of 50 pounds of body weight from the time he stepped into the hospital until the day he finally left, five weeks later.

When Shane had at last made his recovery and the doctors gave him the go-ahead to return home, he couldn’t wait to see his four-legged pal. But, as the video shows, Willie wasn’t quite so keen on seeing him—at first.

From a distance, Willie couldn’t seem to make out exactly who had taken the liberty of walking into his family’s yard and having a seat on their bench, even though Shane was calling out his name and asking him to come over. Instead, Willie stood up straight and alert, darted back and forth, and barked at Shane, apparently confused by the whole situation.

Thankfully, Willie’s attitude soon changed when he managed to get close enough to pick up Shane’s scent, and that nervous and confused dog immediately transformed into the happiest pup you’ve ever seen!

“At first he was unsure and barked at me, but once he got close enough to smell me he recognized me immediately and totally went wild with excitement. It still makes me tear up when I see the video,” Shane said in an interview with The Dodo.

Willie rushed into Shane’s lap and wagged his tail hard enough to wag his entire body along with it. Eventually, he made a dash for a toy and then shot through the yard with a burst of jubilant energy.

It seems that Willie might have thought he had lost his dad—and he nearly did—but now that the two are finally back together, hopefully nothing will ever separate them again!