The battle to better a breed came to a head in the 1970s and 80s. Two sides fought over the future of Dalmatians, a beautiful and beloved dog breed. On the one hand, you have breeders and owners advocating for preserving the bloodlines of Dalmatians, keeping them "pure" and maintaining tradition. On the other, you have progressive thoughts inspired by science and a passion for bettering breeds, rather than continuing with tradition for tradition's sake.

Dalmatians have a higher risk of raised levels of uric acid, a condition known as hyperuricosuria (HU). Over time this increased level of acid builds up into stones and leads to urinary obstruction, a problem first noted in 1938. The results of this condition can be fatal if the stones aren't removed. At one point in time, every Dalmatian across the globe tested for HU came back positive. Dr. Robert Schaible, a geneticist and Dalmatian breeder, set out to reestablish the Dalmatian breed without this genetic defect. He began his work on this project in 1973 with just one Dalmatian/pointer crossbred litter.

This project was done with support from the board of the Dalmatian Club of America (DCA). However, members who were not included in this decision voiced their opposing thoughts and overturned the sitting board members. The decision to overturn the board left those seats to members who opposed the Backcross project. These hard times were a sign of things to come for Dr. Schaible's efforts.

In my recent contact with Dr. Schaible, I asked him about his experience with breed clubs and the backcross project, "I presented the objectives and details of the project to a meeting of the Board of the Dalmatian Club of America. The Board was favorable to what I had planned. DCA members who were interested in this procedure for improvement were also favorable. Other members voiced little objection until backcrossed Dalmatians were registered after the 4th backcross, even though four generations of backcrosses was the most rigorous requirement for attaining pure breeding by professional animal breeding standards." 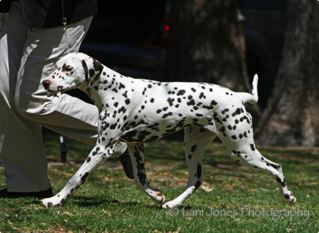 After seven years, Dr. Schaible was able to produce Dalmatians of proper breed type that did not have the HU gene. However, many major registries were hesitant to accept this change at this time. Dalmatian breeders led by the new board for the Dalmatian Club of America pressured the organization to place a hold on these low uric acid (LUA) Dalmatians; this hold remained in place for 30 years (1981-2011). LUA Dalmatians were forced to find registries willing to accept them. Many Dalmatian owners were left looking for clubs that accepted their LUA Dals, which led them to Continental Kennel Club.

The new DCA board voiced their concerns in opposition of LUA Dalmatians, citing that the urinary stones created by the uric acid build-up were not a significant health concern and could be managed by a proper diet and proper hydration. Years of controversy and bickering caused great divisions in the world of Dalmatian breeding and ownership. With many in the Dalmatian world claiming they can spot the difference between LUA Dalmatians and Dalmatians that weren't part of this backcrossing project.

Staunch believers in maintaining the Dalmatian in its "current" form believed that introducing Pointer genes changed everything about the new LUA Dalmatians even down to how they moved. Some also argued for having high uric acid as part of the breed standard. The unwillingness to change, which is unfortunately common in some conformation circles, caused Dr. Schaible's work to be looked down upon for many years.

In 2005, Dr. Schaible's project was seemingly coming to an end. With his efforts not being recognized, his program was dying. That is until Denise Powell, a long time Dalmatian breeder, acquired a female LUA Dalmatian puppy from Dr. Schaible. Powell began to introduce that puppy into her breeding program.

Dr. Danika Bannasch and her research team at UC Davis helped change the perception of backcrossing. Dr. Bannasch identified the gene responsible for the abnormally high uric acid levels in Dalmatians. The research caused the breed clubs and many in the conformation world to give Dr. Schaible's backcross project another chance with some fresh eyes and perspective.

However, the work that Dr. Schaible started is not over. According to him, "about 50% of the members of DCA understood that genetic defects persistent in the breed could not be eliminated by methods current at that time without introducing desirable genes through outcrossing to other breeds. However, the other 50% believed that the purity of the breed could only be maintained by pure breeding even though undesirable genes for defects would permanently remain."

Unfortunately, it seems that outside of small circles, LUA Dalmatians are unheard of. But I believe that Dr. Schaible was just ahead of his time. In recent years, we've seen a shift in perspective and opinions regarding outcrossing and mixed breeds. There are still those that object to non-purebreds and changes in breeds standards, but more and more people are using new methods to help better breeds while maintaining the established standards.

Much like our work with the Siberian Seppala Sleddog, CKC is taking a stance on helping LUA breeders and dalmatians. If you are an owner or breeder of LUA Dalmatians, contact us at ckc@ckcusa.com and let us know how we can help.

Some breeds, such as Newfoundlands and German Shorthaired Pointers, actually have webbing between their toes. The extra skin helps them navigate water with more ease and efficiency.