So your dog eats way too fast, huh?

Besides the fact that it looks gross, it’s also unhealthy and potentially deadly. Let’s take a closer look at why your dog eats so fast and what you can do to prevent it.

Why Eating Quickly Is Dangerous for Dogs

Dogs that eat too quickly don’t chew their meal properly, and the result is big chunks of food sliding down their throat. So big, in fact, that it can cause your dog to choke or gag on his food.

If he’s lucky, the dog will simply gag and vomit it back out. The result is wasted food you’ll have to clean up after (what a joy!) and an upset, empty tummy for your pet.

Quick eaters can also suffer from stomach pains. You see, when dogs eat fast, they suck down lots of air with their meal. This air builds up in the stomach, leading to a condition called gastric dilation-volvulus (GDV)—otherwise known as “bloat.”

To put it simply, bloat occurs when too much air mixes with the food in their stomachs. This causes their intestines to twist—a condition called “volvulus” which causes pain. If it gets out of control, the intestines can even rupture—causing the poor dog to go into shock or even die.

There’s also “food bloat” or “gluttony bloat,” not to be confused with GDV. Food bloat isn’t actually dangerous, thank goodness. It simply means that your friend ate way too much for his own good, so he ends up feeling like a stuffed turkey at Thanksgiving dinner.

If that happens, you should get him to the vet just to be safe—especially since those that suffer from food bloat increase their risk of getting GDV. Signs to watch out for include:

(1) a swollen stomach that’s hard to the touch,

(2) difficulty breathing or too much panting,

(5) obvious signs of pain and discomfort.

You’ll know if your dog is suffering from true GDV because, aside from the previous symptoms, he will start vomiting foam. He might also start pacing because he can’t lie down without feeling pain. In such a case, get him to the vet ASAP because the clock is ticking and he may not have much time left. Yes, it’s that serious! 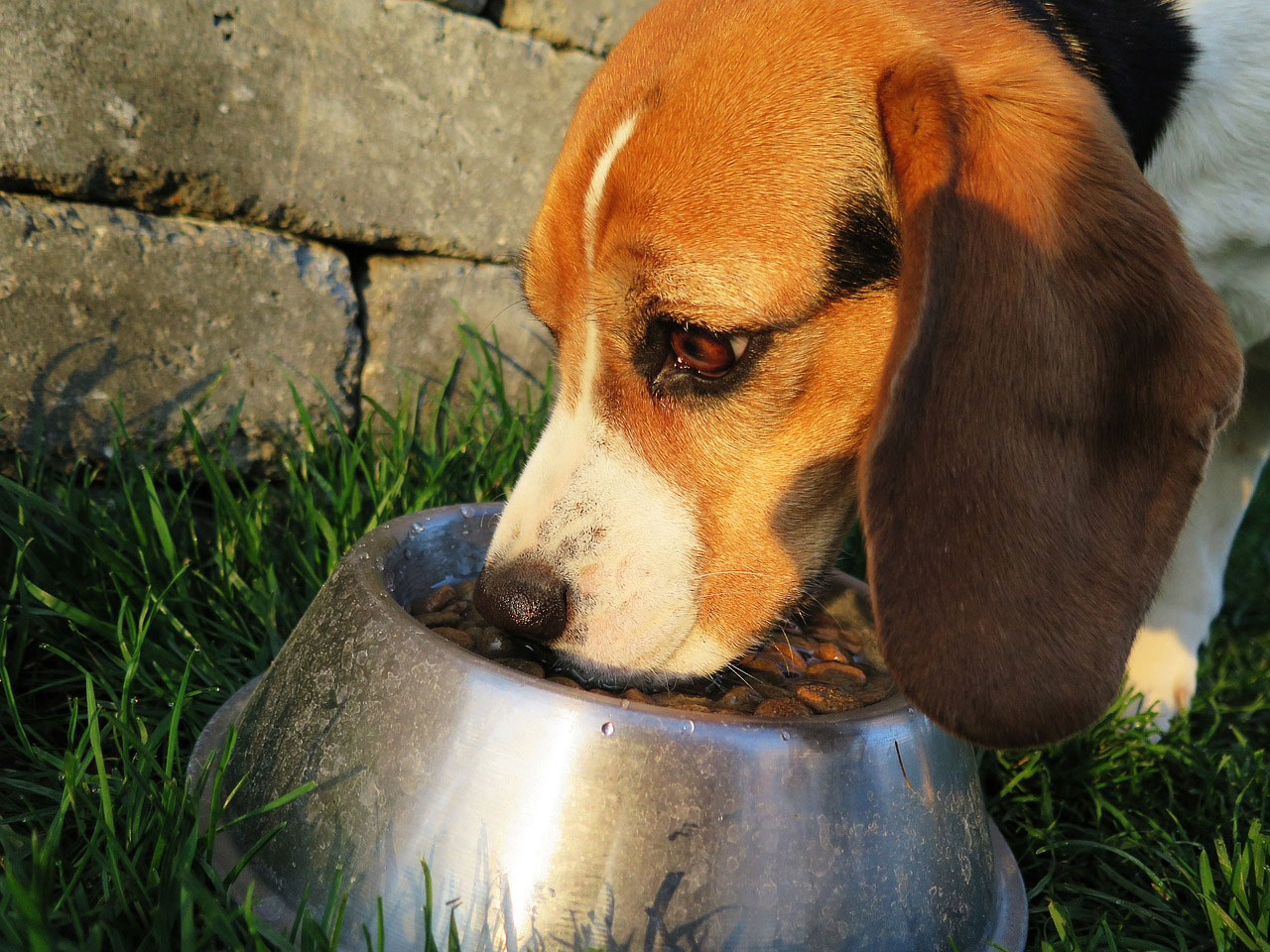 Why Your Dog Eats Too Fast

So just how do you get your dog to eat slower? Before explaining the how, it’s important to first understand the why. Trust me, it makes fixing the problem much easier.

One reason could be medical. Your dog could have parasites that are sucking the nutrients out of whatever he eats, making him hungry all the time. He could also have diabetes mellitus (which wreaks havoc with the metabolism) or Cushing’s disease (which affects middle-aged and older dogs). The only fix here is to address your dog’s medical condition.

It’s also possible that you’re giving your pet the wrong food. If you’re feeding your dog something that doesn’t meet his nutritional needs, it’s similar to starving him. The result is your hungry dog gulps his food down faster.

Your vet could also have prescribed medicines that aren’t working as intended. In such a case, let the doctor know so that adjustments can be made. This is easy to spot, since your dog will eat quicker than he did before being dosed with medication.

Finally, there are psychological reasons that explain why a dog may eat too fast. It’s common for puppies to compete with their siblings for food—especially the runts in a litter. These pups learned early on that speed eating had its advantages. If they ate too slowly, their siblings got most of the food, leaving them to starve. Unfortunately, this behavior can carry on into adulthood.

Having several dogs under the same roof can also be an issue because dogs like to compete with each other. Even if they all get enough food, if one eats fast the others may do the same. Separating your dogs during meal time, such as feeding them in different rooms, can see a dramatic improvement here.

How to Stop Your Dog from Eating Quickly

Here are 10 ways you can slow down your speed eating pooch.

1) Change his feeding habits. If you feed your dog once a day, it’s possible that he’s starving by the time he gets his next meal and gulps it down as a result. Solution? Give him several smaller meals throughout the day.

2) Get a pet feeder. These measure out food and water in small portions, which is ideal if you work away from home. Some models even let you program how much to dispense at specific times.

3) Get a slow-feeder bowl. These are available in all pet stores, and they come with all sorts of nooks and crannies where you stuff food. To get at it, dogs have to work around the obstacles, which force them to eat slower. Slow-feed bowls come in all different shapes and sizes, so make sure you buy the ideal one for your dog.

4) Make your own slow feeder. Simply put a tennis ball (or two) in the middle of the bowl so your dog has to eat around it. If your dog keeps removing the ball, put a smaller bowl in the middle and turn it upside down so your dog can’t remove it.

5) Try a puzzle feeder or treat-release toy. These are food-dispensing gadgets that cough up morsels so long as your pet figures out how to move it to get at the food. These don’t just feed dogs slower; they also challenge their canine minds!

6) Make them search for food. Do this by hiding small portions in different places. Your dog will have to sniff them out and eat them in smaller portions. The time it takes to hunt down the rest gives your dog’s body time to properly digest what he’s eaten.

7) Make meals your training time. All trainers reward animals by feeding them if they do the right thing. You can teach your dog to sit, stand, roll over, and play dead while making sure he doesn’t wolf his food down too quickly. 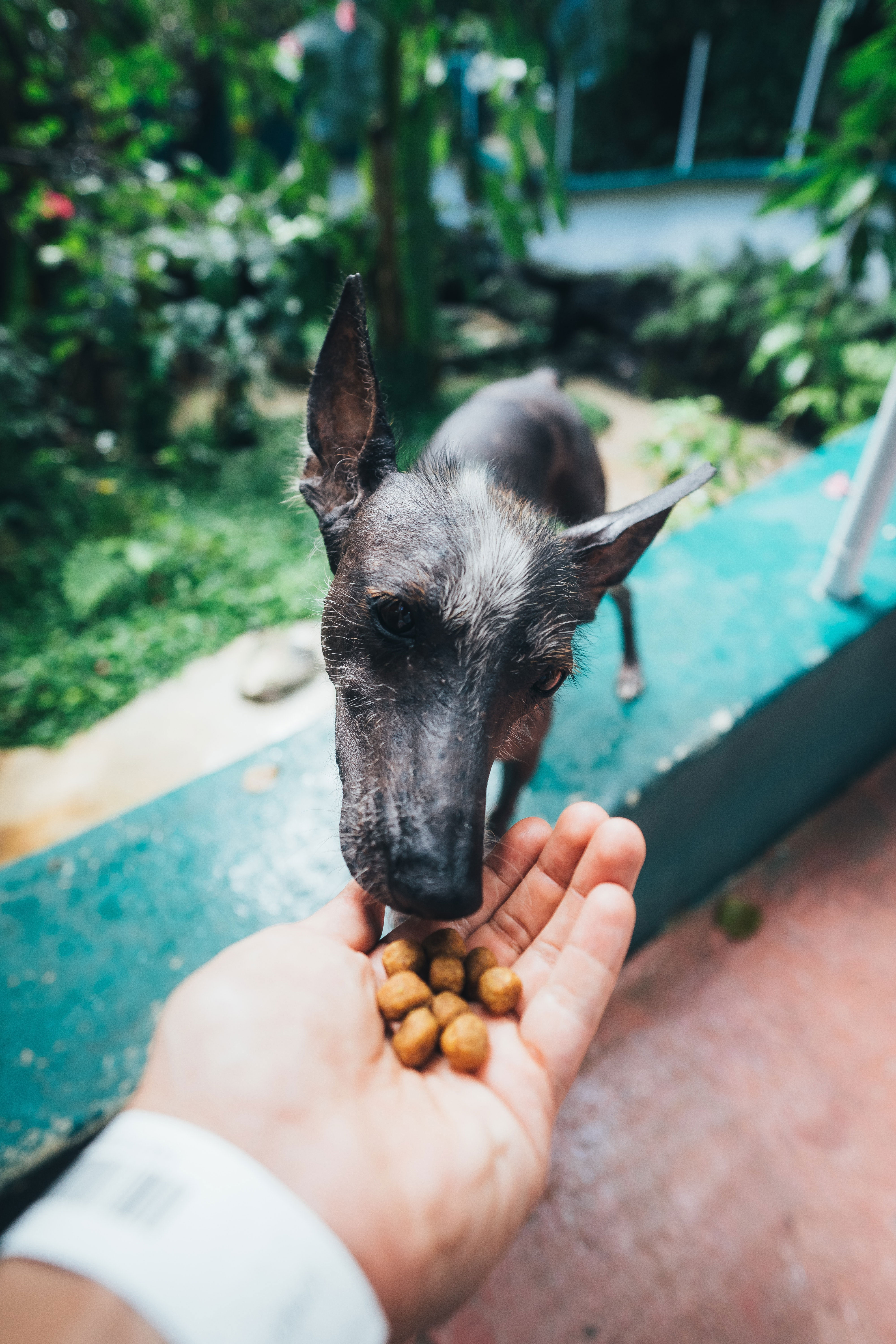 8) Hand feed your dog. Obviously, this isn’t ideal if your dog is a biter, and it can be time consuming. In some extreme cases, however, it’s the only solution—especially if all else fails or if your dog is sick.

9) Spread their food out on a baking pan or large tray. This forces your dog to lick up his or her food and keeps him from just gulping it all down in one go.

10) Feed them with muffin tins. Simply spoon your dog’s food into each cup and voila! The need to dip his tongue into each cup will slow him down, putting the brakes on speed eating.

Ideally, your dog will eventually learn to eat more slowly, but there’s no guarantee that this will ever happen. The important thing is to adapt to your dog’s needs and to be flexible—if one approach doesn’t work, try another.