Once you’ve got your pup all trained and ready to obey you at a moment’s notice, it’s often tempting to start taking them on the road with you. However, before you bring Lassie along with you for a Sunday drive, there are a few things you’re going to want to consider.

The Potential Dangers of Driving With Your Dog

While a goldfish might stay put, the truth is, your dog just isn’t going to want to keep its butt on the floor during a drive. The constantly exciting parade of events flashing by the window is of tremendous interest to the average canine, as are the many fascinating smells and other unknown surprises that each car contains. It’s only natural that he’s going to need to investigate.

But if a dog is simply let off the leash to wander about a car while it’s in motion, there are a few dangers that will naturally arise. Let’s break down some of the concerns associated with driving with your dog in the car and then look at some solutions to address the problem. 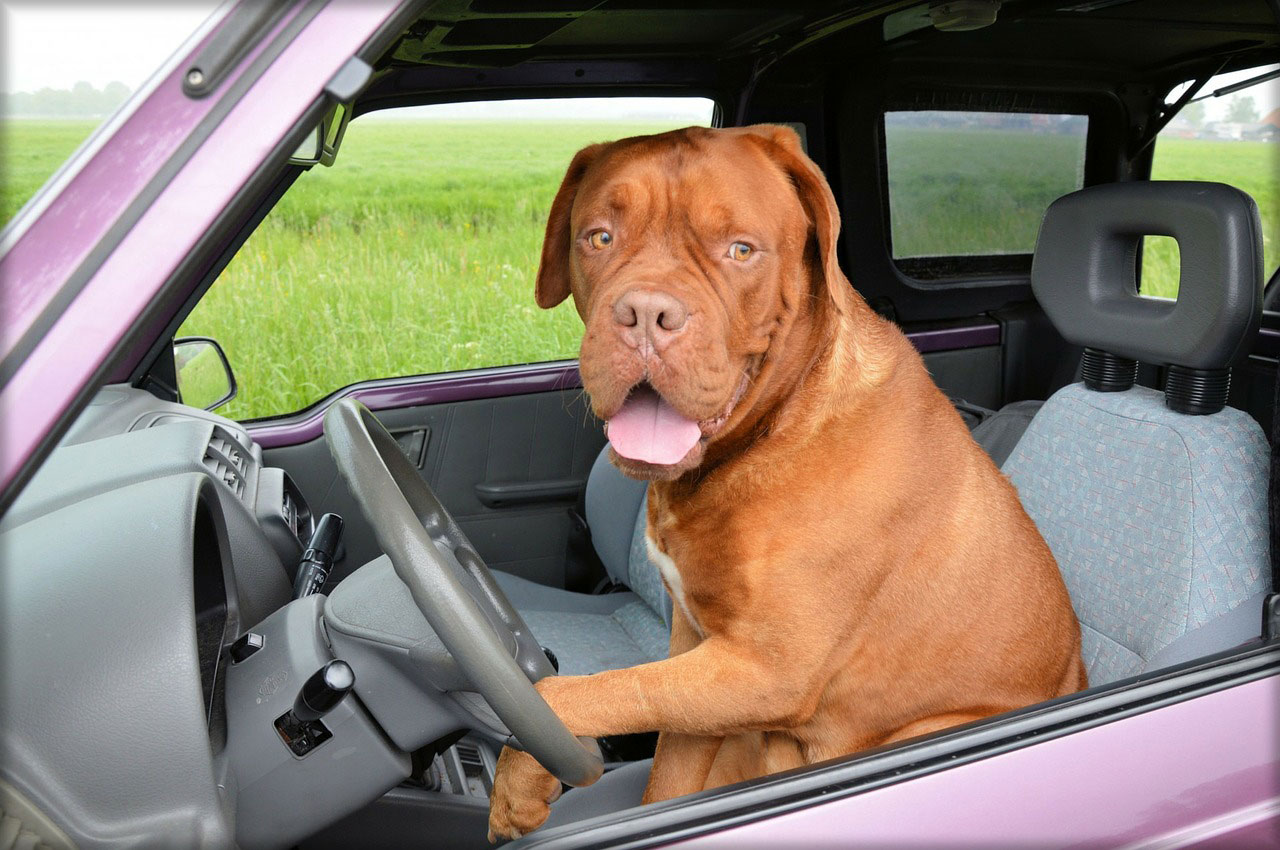 Dogs can be just as injured by a car accident as we can. If an untethered dog gets into an accident, it literally becomes a projectile and can end up injured or even killed in the same way as any person without a seatbelt would be. To help get some perspective, if an 80-pound dog is thrown by a car going 30 miles per hour, it can exert a whopping 2,400 pounds of force. It’s enough to make you pause the next time your pup hops into the back of your car or, even worse, the bed of your pickup.

The term “distracted driving” tends to conjure pictures of someone texting, making phone calls, reaching for something, eating and drinking, trying to change their GPS, turning the dial on the radio, and so on. Rarely does the idea of a dog factor into the mix. But that hardly negates the fact that having Fido in the car with you really can constitute a genuine distraction that can make you a hazard on the road.

From barking and jumping around on the seats to literally trying to sit on your lap, a dog loose in a car without some sort of plan in place can lead to the harm of the animal, the owner, and anyone else on the road with them.

While the physical danger to you, your canine, and even your car are easy ones to point out, another risk that any car-faring pup brings with it is the danger of breaking the law. Now, this isn’t simply because you have a dog in the car. Obviously, there are times when you’re going to need to take your pup to the vet, the park, and so on. However, the way you go about this can make all the difference. For example, in Hawaii you can be fined for just having your dog loose in the car.

Sometimes you can get a ticket for more obvious things like having your dog on your lap. At other times, though, having your dog in the car at all without a proper safety harness can be enough to get you pulled over.

While the thought of a legal penalty may seem extreme in some cases, the risks that come along with recklessly traveling with a puppy are real and shouldn’t be taken lightly.

Another little-thought-of risk is an overprotective dog in an emergency situation. In the event of an accident, an overly protective canine that is loose could become a barrier between yourself and medical personnel who may be trying to get to save your life or someone else’s.

From distracted driving and breaking laws to the inherent risks to the dogs themselves, there are plenty of reasons to take heed when it comes to driving around with your dog in the car.

Dialing in the Safety Factor

While there are many downsides to thoughtless travel with a dog, that doesn’t mean you need to be paralyzed with fear every time you go somewhere with your dog in the car. Here are a few rules that you can implement to ensure that everyone remains safe and sound on the road.

Belt them in.
Dog harnesses are an excellent way to keep both your dog and yourself safe while you’re putting the miles behind you. 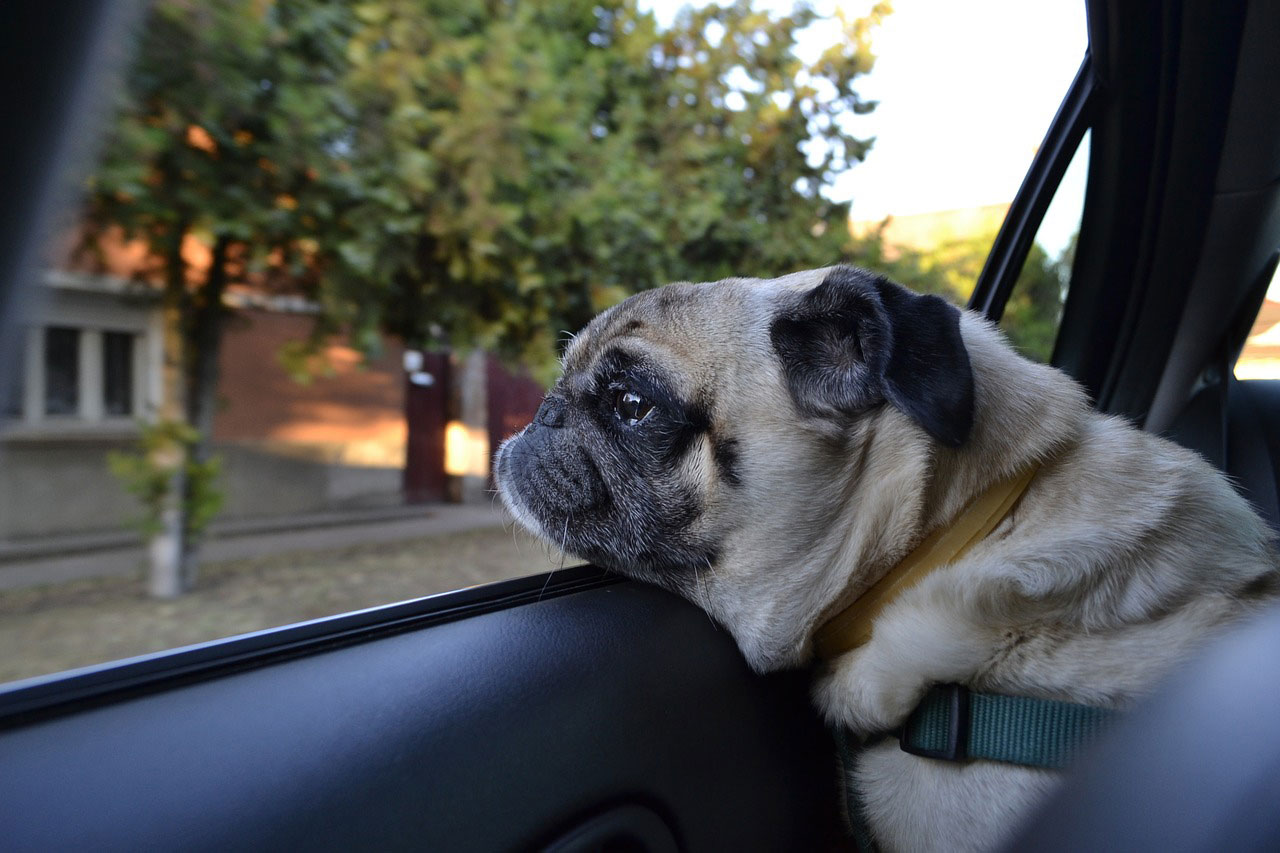 Keep them inside.
While it’s tempting to set up that iconic “dog hanging its head out of the window with its tongue lolling out” scene, this is real life, not a classic country flick. It really is best to resist the temptation and keep those windows rolled up!

Put up a barrier.
Each vehicle is laid out differently. If you’re having trouble keeping your dog from being a distraction, consider setting up a barrier somewhere in the car in to keep the dog from moving about too freely.

Microchip your dog.
While this one has less to do with actual driving safety, as a final suggestion, it’s highly recommended that you microchip your pet before traveling away from home with them.

A Brighter Future for Our Doggy Travels

While there are many ways to control the current risks involved with driving a dog around, the truth is, things are likely to become much easier in the not-too-distant future. The advent of driverless cars has already shown promise to offer an excellent option for pet-related travel in the future. From a significant decrease in the number of accidents to improved interiors designed with an eye towards comfort rather than active driving, driverless cars are likely to help decrease issues like distracted driving while simultaneously increasing the safety of both our dogs and ourselves.

There’s a good chance that we’ll all be heading off into the sunset with our dogs resting happily on our laps before we know it. Until then, keep it safe!

Some dogs are born with a set of differently colored, or bicolored, eyes. The condition, known as heterochromia iridum, does not affect a dog’s vision, but it does look pretty cool.