Late last month, Geoff Hoffman left work and went home like any other afternoon, but what he saw when he arrived ensured that the day would be anything but typical. The front door to Hoffman’s Oklahoma home stood wide open, as did the gate to his fenced-in yard.

As he walked inside to make sense of it all, Hoffman noticed that his television had been slightly moved from the wall—as if someone attempted to take it but left the house before doing so. As far as he could tell, no other items were missing following the apparent home invasion.

But physical valuables were the last thing on Hoffman’s mind at that point, because he soon realized that his beloved adopted dog, Bridget, was nowhere to be found. 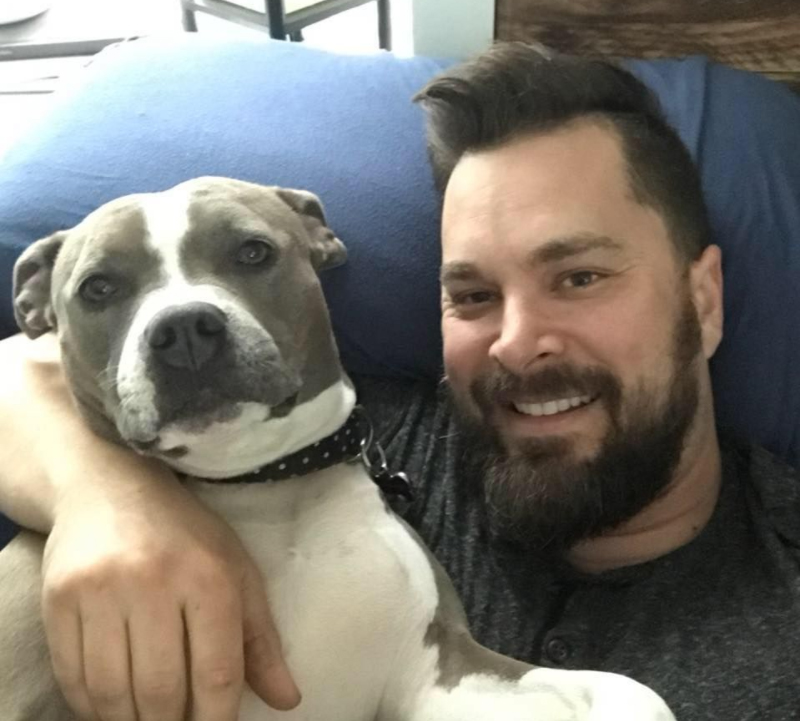 “She comes everywhere with me, so it’s possible someone saw her and followed me home,” Hoffman said. He grew worried that the thief may have broken in with the intent to steal Bridget, a gray and white pit bull, for the purposes of dog fighting.

Understandably, Hoffman was devastated. In fact, he was so distraught that he didn’t eat for three days.

“She is loved beyond definition,” Hoffman wrote on Facebook. “She is my ever-adventurous sidekick and my eternal source of joy. She is missed beyond my ability to articulate.”

But, even though he was hurting and consumed with concern for Bridget’s wellbeing, Hoffman, a veteran army sergeant who served for eight years with Special Ops Forces in Afghanistan, didn’t give up hope. Instead, he remembered his training and sprang into action. 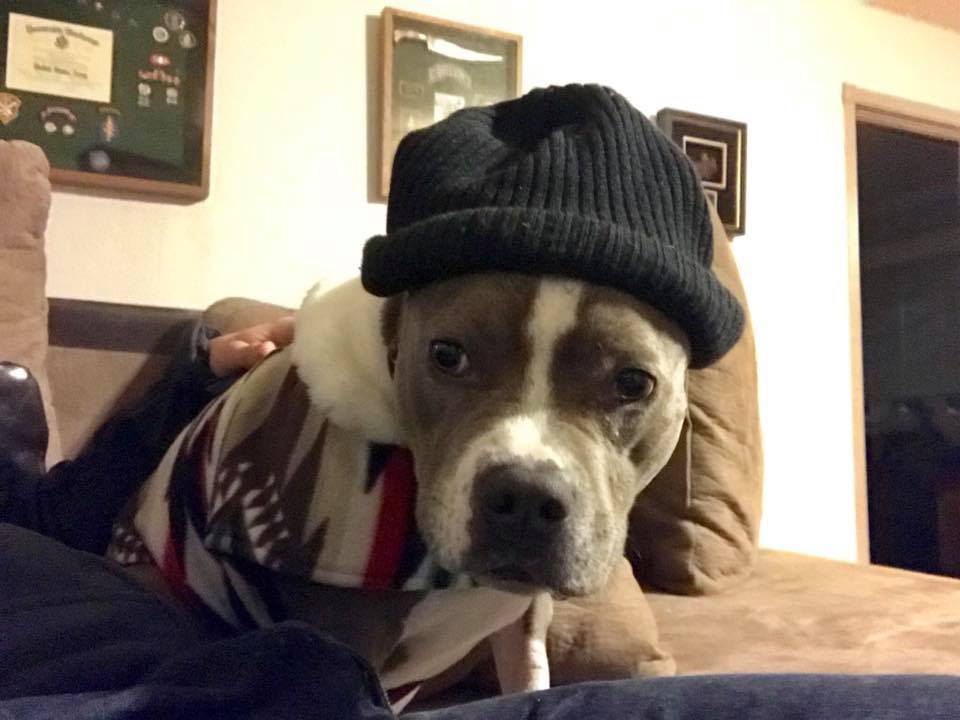 “Sergeant Hoffman was back,” he told Yahoo! Lifestyle. “I was on a mission and told myself I would stop searching for Bridget under two conditions: she returned home, or I knew with certainty that she was dead.”

Hoffman began to canvas the local area, putting up posters and handing out cards with Bridget’s photo and his own contact information all across town. Local news organizations began to follow the story, and, thanks to a Bring Bridget Back Facebook page, eventually the new spread across social media, reaching fellow dog lovers as far away as Europe.

Hoffman’s girlfriend was also on the hunt for Bridget. Both she and Hoffman spent the nights following her disappearance driving around town in search of their furry family member.

As luck would have it, she found herself unable to sleep on Christmas Eve, deciding instead to head out on the road once again in search of the lost dog. 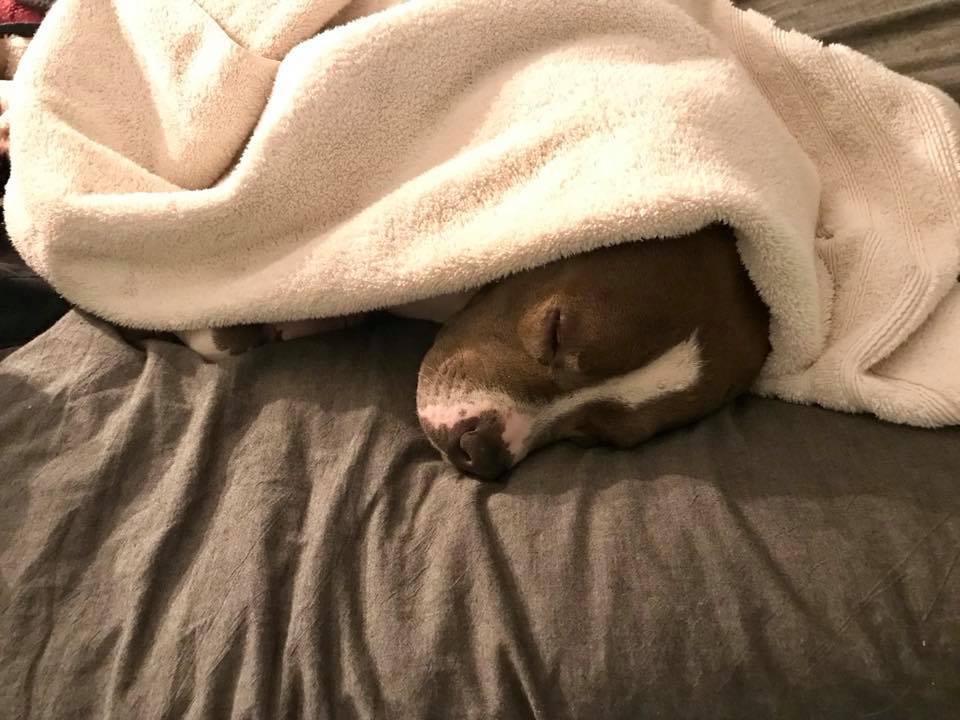 “My girlfriend was driving down a rural road, in below-freezing temperatures, a few miles from my house, when she saw Bridget and slammed on her brakes,” Hoffman recalled. “She was lying by the side of the road, but when she saw my girlfriend she started wagging her tail.”

Sure enough, there was Bridget, injured and exhausted but thrilled to see a familiar face. She was immediately taken to the 24-hour pet care clinic, where Hoffman rushed to meet her.

His suspicions of foul play seemed to be confirmed: she had been starved, deprived of water, and suffered lacerations on her leg, likely in attempts by the dognapper to make her meaner for the purposes of dog fighting. The phone number on her collar had been scratched off, indicating that the thief may have been spooked and released her as a result of the growing media coverage. 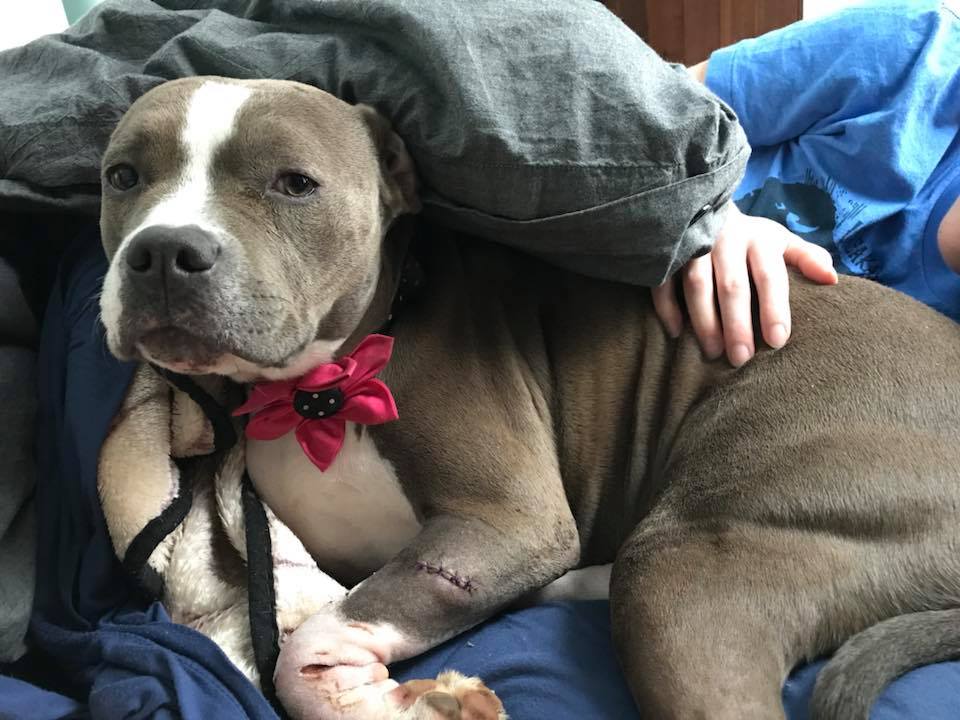 A friend of Hoffman’s set up a GoFundMe page to help cover Bridget’s medical expenses after the ordeal, which has raised over $6,200 of its $2,300 goal.

Hoffman says the support he and Bridget have received has been “mind-blowing,” and it’s clear that their reunion was nothing short of a Christmas miracle. It’s our sincerest hope that nothing will ever come between this happy family again.

According to folklore, Chinese emperors would keep Pekingese dogs in their clothes and use them as deterrents against attackers when necessary. It was also said that the emperor would choose four Pekingese to become loyal bodyguards.