You read that in a high pitch didn’t you? It’s not just you. This phenomenon of talking to dogs with an abnormally high pitched voice is known as Dog Directed Speech, or DDS. DDS is very similar to baby talk or Infant Directed Speech.

Infant Directed Speech, or IDS, is the act of speaking in a higher than normal pitch and slower tempo when speaking to babies. This method of speaking is widely thought to help keep babies engaged and promote their language-learning skills. This speech phenomenon has been observed in numerous languages across the world. DDS takes those same speech patterns and applies them to dogs. Researchers are finding that dogs respond better to dog directed speech, than normal speaking patterns.

Early studies showed that puppies engaged more with DDS than adult dogs. However, a recent study conducted by Dr. Kaite Slocombe and Ph. D. student Alex Benjamin at the University of York showed that, while puppies may find DDS more engaging, it could be due to a number of factors. One of the suspected factors is the adult dog’s familiarity with certain words, like “treat” or “walk.” Benjamin and Slocombe further state: “Therefore, while puppies may rely wholly on prosodic information [which pertains to the meaning extracted from sound and rhythm], adult dogs seem to take both content and prosody into account, and only when these two things are relevant to them, they do display a behavioural preference.” 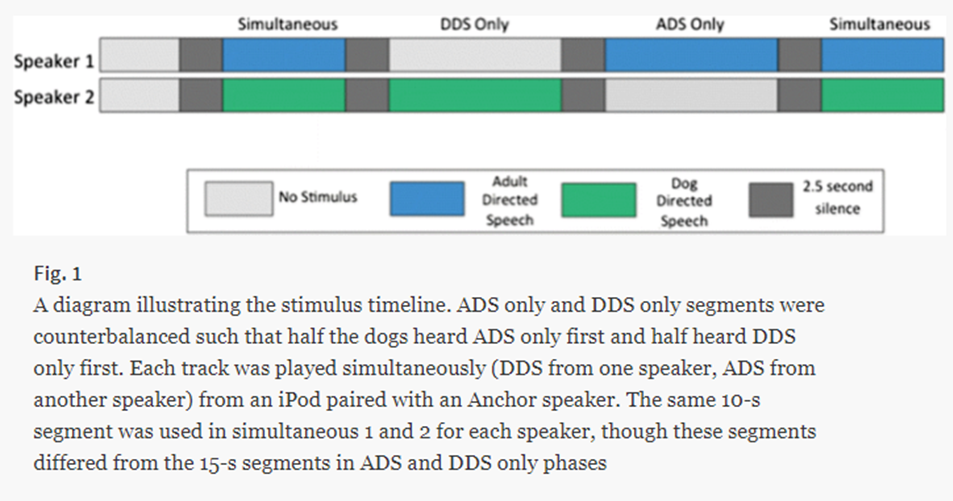 Benjamin and Slocombe’s experiment placed two speakers in a room with a dog. The speakers played recordings of a person speaking the same phrase in a DDS pattern and a normal pattern. The following figures from their report illustrate the experiment design. 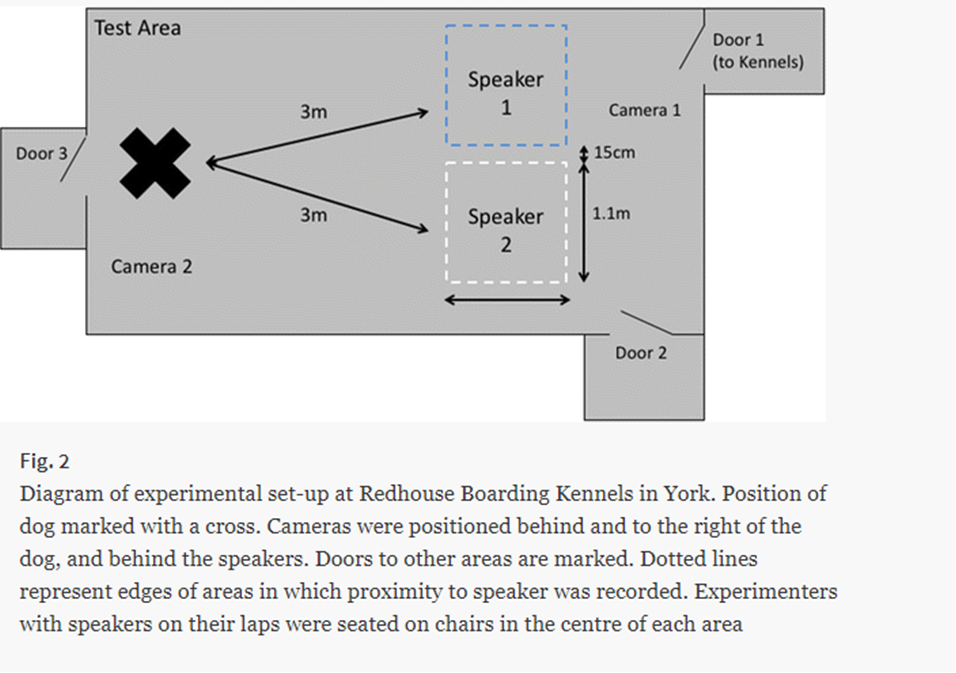 The experiment found that the 37 dogs they used would more often than not focus on the speaker that used DDS rather than normal speaking patterns (or “ADS” as it’s called in this experiment).

In a different study, led by Dr. Sarah Jeanin, women were placed in a room with dogs and asked to speak to them while researchers observed the responses. In an email to NPR, Jeanin discussed why the team decided to focus on female voices for the experiment: “We had good scientific reasons to focus on women's PDS [Pupp Directed Speech], because previous studies have clearly pointed out gender differences with respect to the use of PDS (and maybe for IDS): male owners speak less frequently when interacting with their dogs and are less likely to use PDS than female owners.” Jeanin went on to say that most owners are aware of their changes in speech patterns when addressing their dogs, but does this behavior have any meaning to the dogs?

Let’s try something: say, “Wanna go for a walk?” like you normally would to your canine companion. Now, try, “Who got into the trash?” like you walked in on your dog destroying your trash bin to get to a chicken carcass. Notice any difference in the tone? The friendly, rewarding question of a walk is usually higher pitched, while the pre-reprimanding question of, “Who got into the trash?” (we know it was you, Freyja) is in a much lower, firmer tone.

Dogs tend to associate higher-pitched speaking with feelings of excitement or reward, because the higher-pitched noise reflects a dog’s own natural ways of communicating excitement. On the other hand, a low, authoritative voice conveys just that: authority. The low tone is often perceived by the dog as punishing or threatening.

Researchers have also observed another peculiar way we speak to our dogs. Many owners—myself included—will speak with their dogs in a conversational manner. I do this pretty regularly with my dogs. It’s kind of become a routine to ask them, “How was work?” or, “How was your day?” when I get home. I’m sure it sounds crazy to non-dog people when I say, “Oh, he did that? And then what happened?” after Freyja throws a tantrum and starts howling at me.

Saying phrases like the aforementioned “Wanna go for a walk?” or, “Wanna play with your ball?” don’t necessarily get you an “Um, yes I want to play with my ball, Devin. What kind of question is that?” response from your dog. Of course this is mostly because they can’t speak, but the reasons behind that kind of talking and intonation aren’t necessarily for starting a conversation. These phrases are used mostly to create a bond between you and your dog. People in this situation, while their dog may not understand them, feel like their pet has become their conversation partner.

The conversational manner of speaking, combined with the “dog-speak,” helps build a bond between you and your furry friend. Returning to the Slocombe and Benjamin study, their research found that dogs ultimately wanted to spend more time with people that used dog directed speech—so it seems clear that your dog is paying attention to what you say and how you say it.

Do you use dog directed speech with your canine companion? Let us know in the comments if so!