No one could have expected the sheer devastation that Hurricane Harvey would bring when it made landfall in southeast Texas last weekend. Thousands of residents were rocked by the force of the storm, which brought record-breaking rain and unprecedented destruction to the state.

But, despite the unimaginable situation many Texans found themselves in, there were stories that provided glimmers of hope and heroism amid the devastation.

There was the photo of a Harris County Sheriff’s Deputy slumped over in exhaustion after working more than 12 hours straight to assist victims of the storm. There was the rescue of 18 residents from a local assisted living center after flood waters entered the facility and rose to waist-deep heights. And of course, there were the stories of the Cajun Navy, an organized group of Louisiana residents who banded together and took their boats across state lines to assist in search and rescue efforts, just as they had done in their home state during the unprecedented Baton Rouge-area floods of last year.

But amid all these examples of hope and strength through adversity, it was the story of a lost Texas dog photographed carrying a big bag of food in his mouth that grabbed many by the heartstrings.

Salvador Segovia put food and water on the back porch for his grandson’s dog, Otis, before the storm hit. But at some point, Otis became frightened enough to break through the back porch screen door and take his chances elsewhere. When Segovia next checked on Otis, he found no trace of the storm-shocked dog.

“I stuck my head out yelling and yelling, and no Otis,” Segovia told the Washington Post. “The following morning, I got out and kept yelling, circled the block and everything, and nothing. We didn’t know where Otis was.” 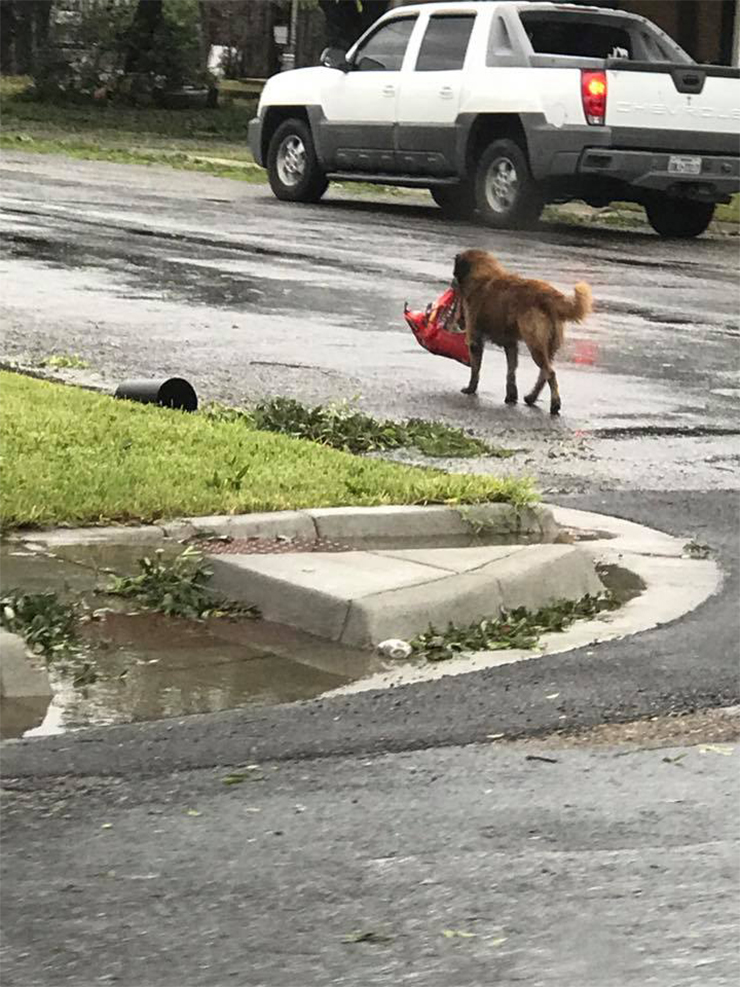 Little did Segovia know that Otis wasn’t just safe, but he was about to steal the hearts of thousands across the Internet.

Tiele Dockens, who lives a few miles away from Segovia, was out checking on her neighbors the day after the storm hit. While she was walking the rain-covered streets, she noticed something peculiar: a German shepherd mix was confidently walking around with a large bag of kibble hanging from his mouth.

Dockens snapped a picture of the strange scene and uploaded it to social media, where it has since gained over 10,000 likes and 33,000 shares.

“It’s like he’s on a mission [in the picture],” Dockens said. “I just thought it was so cute.”

Since Otis is well-known and loved by the community, locals who see him when he’s off on his adventures often offer treats to the six-year-old dog when he comes by. This time, Otis went to one of the places where he’s typically fed and decided that instead of waiting around for the usual person to give him food, he would just help himself to the entire bag instead.

Not long after Dockens’s picture was posted, Otis was reunited with the Segovias.

“This lady comes by and tells me, ‘Is that your dog coming down the road?’” Salvador Segovia said. “And I turn around, there comes Otis, and he’s carrying food!”

So Otis finally came home to his worried family, and they were thrilled to see him make his triumphant return.

But, while Otis’s escape from home had a happy ending, it could have easily turned out very differently. That is why this story should serve as a reminder to all pet owners: when you’re preparing for an emergency with your family, don’t forget to have a plan for your furry family members as well.