Training your dog is an excellent way to deal with long periods of isolation. Many dogs respond well to training with their favorite treats. However, some dogs’ are more motivated by games and toys. Playing tug-o-war can be a fantastic game to use in training. It keeps the dog engaged with the handler. It’s kinetic, so energetic dogs can exercise both mind and body, and it is excellent for use both indoors or outdoors. Playing tug with your dog is a lot of fun. Contrary to popular belief, it does not cause bad behaviors in dogs as long as you and the dog understand a few basic ground rules, as outlined here.

To start, have two identical tug toys on hand, such as two pieces of rope or two pieces of hose. In this way, you won’t have to chase your dog down to get the tug, but simply show him the other toy to lure him back to you to play.

Hold the tug with each hand at each end of the tug, giving ample room in the middle for the dog to bite the tug. Then provide a cue to let him know it’s okay to take it, such as “take it,” or “tug.”

Not all dogs are born knowing how to tug properly, so you may need to teach them how to play. You can do this by waving the tug around on the floor in front of the dog and letting him chase it. When they catch it with their mouth, grab the other end, gently pull for just a few seconds, and then release it to the dog. Give lots of praise for him “winning.” In the beginning, we let the dog win a lot to teach him the point of the game and to build enthusiasm and interest in the tug. Be sure to let them win a LOT in the beginning.

As your dog catches on, hold the tug tighter and for slightly longer periods until he understands that he is trying to pull the tug away from you.

Once your dog catches on to the game, you can start establishing the ground rules.

The dog’s teeth should never make contact with human skin. Dogs are extremely precise with their teeth, as accurate as a person is with their hands! If contact with the skin is made, even if by accident, end the game (with the tug out of sight). You can resume playing after a five-minute break, or when the dog has calmed down a bit.

You want to teach the dog that you, the handler, is the one who can make the tug “come to life.” As long as the tug is moving, it’s fun for the dog. If the dog doesn’t want to follow the release command, the game should be stopped until the dog releases the toy and has had a brief timeout.

When the dog releases the toy, the game can be started again by giving the play command. Note: Trying to take the tug away by pulling it away from the dog will only incite the dog’s predatory behavior (which is what playing tug is) and desire to get it. As long as the tug is moving, or is being pulled, the dog will hold on to it even tighter. Instead, stop all movement and wait for the dog to release it.

Once your dog understands the release command, ask for it randomly while playing to keep it sharp. 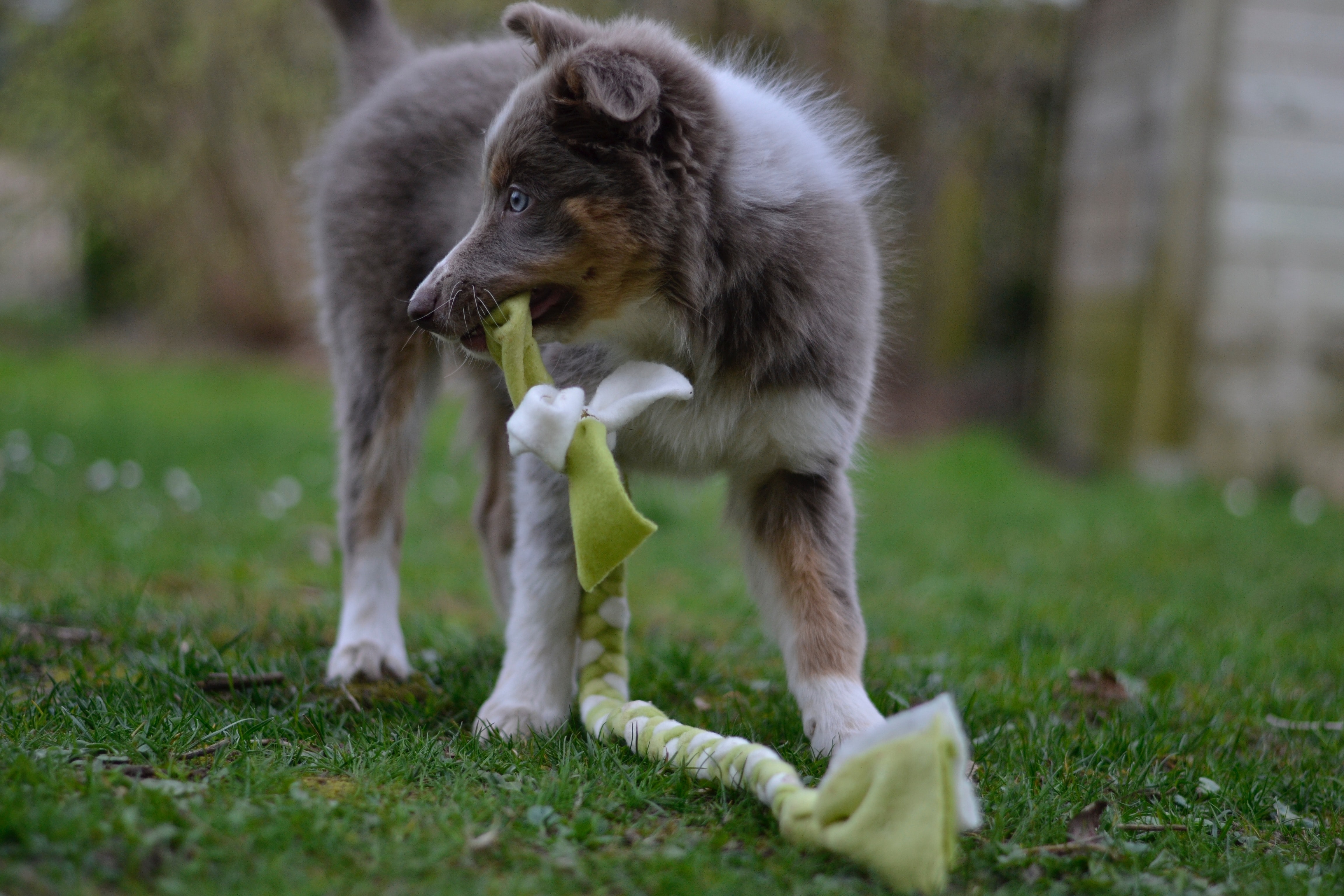 Incorporate your dog’s training commands to help sharpen them. While playing tug, ask your dog to “Out” and then hold the toy behind your back, freeze all movement on your part, and ask the dog to perform a few basic training commands such as “sit,” “heel,” or “down.” Once he completes them, pull the tug back out and give the play command.

As the dog’s response becomes sharper and quicker, you can ask the dog to hold the commands for more extended periods.

ALWAYS end the game with the dog still eager to play, before the dog grows tired. Ending the game before the dog becomes exhausted will increase the dog’s desire and excitement to play again the next time. Playing until the dog is tired or becomes disinterested will erode the desire and enthusiasm to play the game in the future. The tug will lose its value as a rewarding game.

End the game on a positive note by ending it on something that the dog can easily accomplish. Give a training command, such as “down,” then give the dog a large, high-value treat, such as a pig-ear, while putting the tug away out of his reach and out of his sight. Avoid snatching the tug up, putting it away without trading him for a toy to perform a command, or executing the “loose” command. In this way, the dog will learn to trust that you aren’t just taking his favorite toy away for nothing. Also, putting the toy away and not leaving the tug out for the dog to have free access to will prevent the tug’s value from eroding by always being available. Instead, the tug will only come out when you want to play this particular and fun game with the dog.