Every park has one: that one dog everyone avoids. When the owner’s car squeals to a stop in the parking lot, the playground freezes, dark clouds loom overhead, and panicking dogs run to their owners as the park bully emerges from the backseat.

Well, maybe not as melodramatic as that. Exaggerations aside, when “the bully” arrives, play stops. Many owners reschedule their park visits before or after the bully’s. Ironically, one out-of-control dog controls multiple lives (human and canine).

Dog parks are wonderful amenities for urban communities, as much perk as necessity. Dog parks add value to city life, an opportunity for dogs and owners to enjoy outdoor fun in the absence of backyards. Unfortunately, dog-park bullies can ruin the experience.

Human bullies are portrayed as mean-spirited, abusive characters. Because many dog owners don’t observe the same fist-pounding, name-calling behavior from their pets, they don’t recognize canine bully behavior and misinterpret the bullying as play. Dogs can, and do, bully other dogs, and these bullies can cause both physical and psychological damage, especially to young puppies and dogs that lack coping and rebound skills.

Dog-dog interaction is different from dog-human interaction. Dogs are social creatures and coexist in close-knit packs like their wild ancestors, using an intricate social system. This system governs their communication and ensures peace (for the most part) between well-adjusted, well-socialized canines. Play—even at dog parks—operates according to this established social system. After all, play is practice for life.

With their subtle body language, dogs can signal and interpret a range of emotions and messages. These signals, known as “calming signals,” carry meaning: “Let’s play,” “I’m not a threat,” “I’m feeling uncomfortable,” and “Please stop scaring me.”

Proper Play and the Birth of Bullies

Dogs engaged in polite and proper play will pause, exchange roles, and honor each other’s calming signals. Reversing roles, dogs will alternate between chasing and being caught, wrestling and being pinned, possessing and losing possession of objects. When one dog exhibits calming signals, a polite playmate will respond with his own calming signals or pause the game to deescalate the action. This exchange reassures both dogs that play is still safe and not harmful. 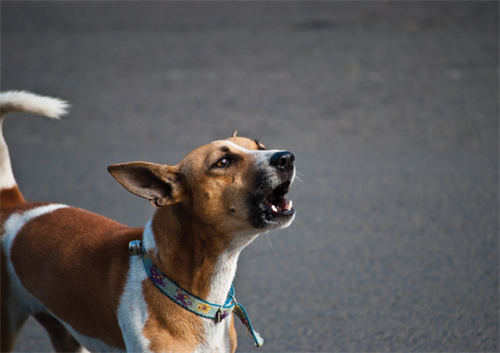 But, if dogs have an innate social code, how are bullies born? For the most part, dogs understand and abide by social rules and interact correctly with one another. Issues arise when one dog’s calming signals are not reciprocated or honored by another dog. When this exchange is ignored or abused, bullying occurs. Despite one dog’s attempt to de-escalate or end pushy, rude, intimidating, or aggressive interactions, the “bully dog” continues his abusive behavior. For dogs, genetics, physiology, environment, unintentional encouragement (from dogs and humans), as well as the owner’s failure to recognize the behavior at an early age are the main factors of aggressive and bullying behavior. Although canine bullying differs from human bullying, canine bullying (as with humans) can be both intentional and unintentional.

Remember, bullying is a behavior, not a breed. Bullies populate every breed and mix. While exploring breed tendencies does explain why some dogs may be more prone to aggressive habits, making sweeping generalizations about an entire breed is unfair. Despite the myth of stereotypes, well-socialized, well-adjusted goodwill ambassadors stock every breed. The responsibility of identifying, correcting, and preventing bullying behavior falls on breeders and owners, not on the dog.

Beginning in early puppyhood, any dog can be primed for bullying behavior. One of the most critical periods of development for young puppies is between two and a half weeks and seven weeks. During this period, a puppy learns to be a dog and develops his intraspecific communication skills, the main reason puppies should not be removed from their littermates and mother prior to seven weeks of age. Absence of proper social development leaves puppies vulnerable to unintentional social misbehaviors (such as bullying). They act the wrong way because they’ve never learned the right way. 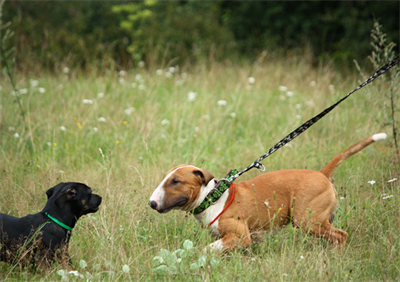 Other unintentional offenders are energetic dogs. Some dogs are born with hyperdrive as their only setting, and they zoom from here to there with unparalleled energy, lacking impulse control. Despite their behavior, which can be mistaken as aggressive or pushy, hyperactive dogs are well intentioned. Poor training, overexcitement, and poor social skills enslave their actions. They may also have naturally higher pain tolerances, and from an early age they often are allowed to play roughly with their humans or housemates. These dogs may play to the point that their gums bleed from rough mouthing, yet they never exhibit aggression toward their housemates. Unfortunately, this type of rough play is not well received in the dog park. Other dogs may not be accustomed to such rough play. Hyper dogs may mean well, but park playmates may view the behavior as aggressive or threatening. Mismatched play styles and energy levels create this type of unintentional bullying.

Some dogs thrive on the aggressor-victim relationship and ignore the calming signals of other dogs. The cycle of antagonizing and victimizing other dogs into submission reinforces and rewards the aggressor’s behavior. This type of aggressive dog usually suffers from an inferiority complex and preys on weaker—and sometimes larger, more confident—dogs in order to reinforce his need for dominance. Any breed can produce intentional aggressors.

Taking the “Bully” by the Horns

Whether a dog is socially underdeveloped, hyperactive, or an intentional aggressor, recognizing bullying when the behavior first surfaces can prevent potentially serious altercations. While many owners remain vigilant, spotting a “bully dog” isn’t always clear cut, and humans, unfortunately, tend to misidentify dog behavior by imposing human social standards on canine interaction. Holding dogs to human standards makes it difficult to detect the bully, even if the dog is their own precious pooch.

Scrutinizing every potential bully is focusing on the wrong end of the situation. Owners often zoom-in on the presumed “aggressor’s” behavior and misjudge play for bullying (and vice versa). During normal play, dogs chase, bark, growl, mount, bite, and shake. During a fight, dogs chase, bark, growl, mount, bite, and shake. So what’s the difference? Some play appears and sounds very aggressive. Some aggressive behavior can easily be mistaken for play. Instead of judging interaction based on the dominant dog, owners should focus on the “target dogs”—the victims. Dogs reciprocate action during play, and if both dogs interact willingly and respectfully (reversing roles, exchanging calming signals, pausing between games) then play is most likely safe, even if it is rough. When worrisome owners continually stop normal play, they limit their dogs’ socialization. Pet parents should mother, not smother—or for the sake of gender politics: father, not bother—their dogs. 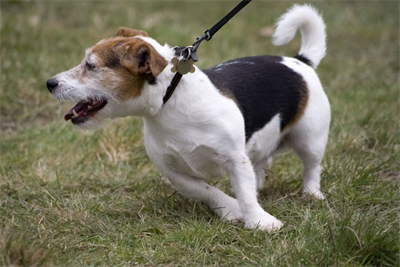 However, some play turns sour, and owners need to stop the abuse to protect their pets (whether their dogs are the victims or bullies). During bullying, “target dogs” will show signs of stress. Victims retreat into submissive body language: lowered tail, ears pinned back, forehead smoothed out, corners of the mouth pulled back. Some of these calming signals will appear in normal play, but the key to recognizing a victim is that the target dog will sustain this body language during all interaction with the bully. The victim, through his body language, is attempting to appease the bully and may lick his aggressor’s mouth. Rapid panting, sweating through the paws, and rolling onto the back with the tail tucked—when coupled with other submissive body language and sustained during the entire interaction—indicates the victim’s lack of confidence in an aggressor’s presence. Victims may even attempt to escape or hide.

Quick action, such as calling a victim dog to come, can often spare greater psychological and physical damage and provide the dog with a welcomed escape. Sometimes the victim’s fear freezes him in the bullying environment. If the victim dog is intimidated to the point that he will not move, the owner needs to intervene physically—but cautiously. If the bully doesn’t exhibit aggression toward humans, the victim’s owner should move between the bully and target, a tactic called splitting. Dogs use “splitting” in their social code to break the intensity of a situation.

For another method of intervention, owners can “shoo” the bully (using a stern voice and firm body posture) while moving the victim to another part of the park. The scene may alert the bully’s owner and provide an opportunity for both owners to politely and calmly discuss the problem behavior. Most bully owners—again, “bully” refers to a behavior, not a breed—are unaware of the problem, because of denial, ignorance, or poor monitoring. When confronted with the situation, the bully’s owner may graciously agree to monitor his dog’s behavior better. Then again, he may not. Sometimes the owner is open to feedback in transforming the bully into a respectful playmate with simple obedience training. And sometimes the owner is not.

If the bully’s owner is unwilling or unable to control the dog, remember the three R’s: retreat, report, remove. First try retreating to another part of the park, away from the bully. If the aggression is severe and the bully persists, report the dog and owner to park officials. Remove the victim dog from the park, and find a new, safe location for him to play—possibly schedule a playdate with respectful playmates, matching training level, play styles, and energy levels. Driving a little farther for another park or planning a playdate in advance may seem bothersome at first, but the payoff of a healthier dog—mentally and physically—is worth the effort.

Crystal Demars graduated with honors from the Arizona Canine Academy and is a former member of the Association of Pet Dog Trainers, the International Association of Canine Professionals, PetTech, and the American Temperament Testing Society, to name a few. She has served as a pet first-aid instructor, president of the Every Dog Club, and training director for the Louisiana Canine Team Builders Association and Bayou Bullies Weight Pull Association. A former instructor for Continental Kennel Club’s Dog Training Instructors Course, she has taught numerous courses on dog behavior, development, and training. She continues to use her skills as an evaluator and judge for several disciplines, including obedience, precision agility, tracking and article search, weight pulling, Canine Companion Certification, and all-breed conformation. In addition, she acts as a consultant for the Canine Care and Training Program, providing hands-on workshops and training for school teachers and students.

Some dogs are born with a mutated myostatin gene that causes them to grow muscles many times larger than the average size. In 2015, Chinese scientists were able to modify the genes of beagles to produce exceptionally muscular dogs.